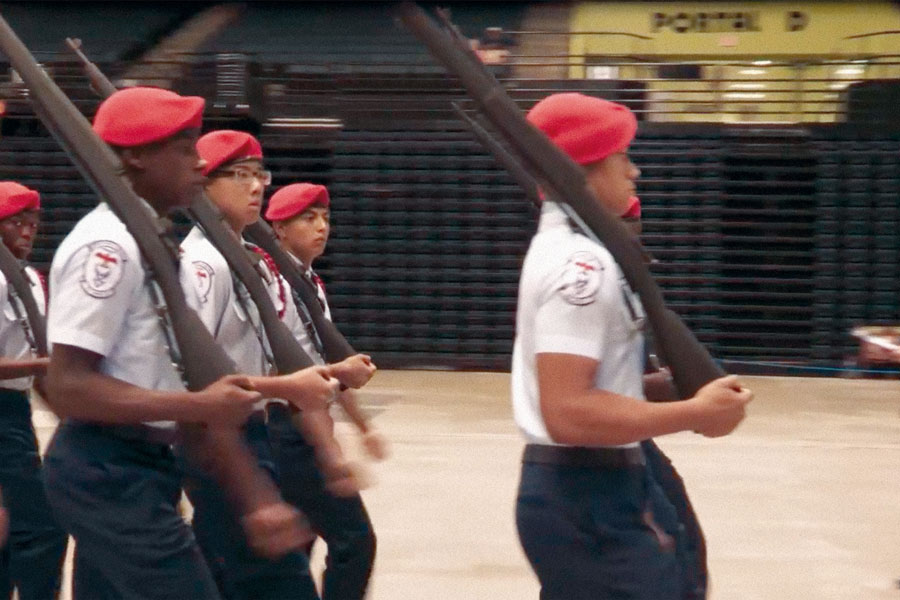 SK
The National Defense Act of 1916 created the Reserve Officers’ Training Corps (rotc), which operates at the university level, along with Junior rotc, which operates at the high school level. At first, JROTC was kind of like rotc’s unwanted stepchild. There were only a couple hundred JROTC units across the country until the mid-1960s.

BH
Anyone under the age of eighteen should not be recruited or be part of the military system. I believe this is a United Nations protocol, and in my view the United States doesn’t follow it.

SK
Resistance to military influence in education goes way back in the United States — even as far back as John Dewey, the philosopher celebrated as the father of progressive education, who was very involved in efforts to resist JROTC in the 1920s and 1930s. In 1917, at their national convention in St Louis, the Socialist Party called for “consistent propaganda against military training and militaristic teaching in the public schools,” and the party’s 1962 platform objected to rotc as “military conditioning inappropriate to education in a democracy.”

The term “counter-recruitment” was first coined in ’72 or ’73. Mostly, it was people from historic peace churches — Quakers and Mennonites — who were involved in those years, as well as people who wanted to continue their involvement in peace work following the end of the draft and the drawdown of hostilities in Vietnam.

RJ
During the Vietnam War, our analysis of militarism’s impact was fairly limited. Later on, in the late 1970s and early 1980s, some of us who had been around during the Vietnam War began to realize we needed a much broader analysis. We had to look beyond the impact of militarism on individuals and instead look at its impact on whole communities. This meant we had to look at where military recruiters are most present — schools in working-class neighborhoods.

SK
The Pentagon’s own research shows that, while JROTC doesn’t really improve academic outcomes, it works well as a turnstile for the armed forces. It’s obvious why the program is so strongly supported by the Pentagon: about 40 percent of students who spend at least three years in JROTC go into the military after graduation.

RJ
Instead of the legal draft we fought against during the Vietnam War, we started looking at the “poverty draft”: people being pushed into the military by their economic and social status. We realized pretty quickly that the poverty draft needed to be addressed differently than the legal draft. We couldn’t just go out and moralize about participation in war. We needed to actually offer something as an alternative to young people.

NC
Yes, the issue of school militarism is about access, about enabling youth to attend college or enter good, nonmilitary jobs. At Project YANO, we educate folks about training opportunities in skills such as plumbing — skills that can lead to union jobs. That’s a big part of my work now: to help people understand that trade unions also offer benefits. You don’t have to go join the military for that. You can be a plumber or a steelworker or an electrician.

BH
In the early 2010s, a lot of new recruiting centers were opening up in underserved neighborhoods in New York City. We demonstrated in front of those little recruiting centers with Veterans for Peace. Eventually, the armed forces got the numbers they wanted, so they packed up and closed their doors.

I have given public testimony at New York City Council Department of Education meetings lobbying for the elimination of the $1.5–1.6 million tax levy allocated for JROTC in the New York City education budget. More recently, I’ve met with New York City teachers, now members of the Retired Teachers Chapter of the United Federation of Teachers, who are concerned about the fact that JROTC instructors aren’t certified to teach in New York City public high schools, the cost of the program, the curriculum (which was developed by the Pentagon), and the display of rifles.

NC
I began to do counter-recruiting work in 2007, when I was in high school. I went to Mission Bay High School in San Diego. The military had a big presence at our school, doing regular recruitment. About 73 percent of the folks at Mission Bay were on free or reduced lunch. It was a predominantly working-class school. The school was predominantly people of color: about 63 percent of students identified as Hispanic, while only about 15 or 16 percent were white. Right before my senior year, the incoming principal reduced support for college preparatory and honors courses, and she brought in the JROTC program.

We took it very personally. I saw it as a personal challenge. I felt we were backtracking on a commitment, made in a previous year, that everyone should have the ability to go to college if that’s what they want to do. Here were these authority figures — administrators! — trying to decide what my future was going to be. A lot of students had a defiant attitude about that.

We leafleted during an open house to inform parents, and we were asked to leave the campus. We were kicked out. We also organized walkouts to bring attention to the military presence. Once, the vice principal followed us in a school police car, trying to intimidate people to leave the walkout and go back to school. But we still marched over to a recruitment station and vocalized our message: we didn’t want a military presence or recruiters on our campus.

Ultimately, we organized a boycott of the JROTC class because there was a requirement that JROTC had to maintain enrollment of more than one hundred students or 10 percent of the student body. If they fell below that threshold for two consecutive years, they would lose federal funding, and the program would have to close. At Mission Bay, we made sure their enrollment numbers were low for two consecutive years. Mission Bay no longer has a JROTC program.

RJ
It’s worth pointing out that, in this case, parents and students had to pressure the principal at that school to follow the law. The principal wanted to keep the program in place, despite it not meeting the minimum enrollment levels.

Ultimately, we were successful in getting rid of the shooting ranges at eleven schools in the San Diego Unified School District, after a two-year battle. They were all removed in 2009.

SK
It’s nearly impossible to dislodge an existing JROTC unit through a public campaign demanding its removal. Student boycotts, like the story Nancy told about Mission Bay High School, are really the most promising approach for forcing JROTC units to close down that we’ve seen in the past twenty or thirty years.

The War on Terror has made organizing against JROTC more difficult. There are units at roughly 3,400 high schools today, where fourteen- to seventeen-year-old students suit up, perform drills, and take classes under military officers. And there’s room to grow: in 2009, Congress approved the potential for increasing the program to 3,700 units. The various branches just haven’t set aside the funds to pull that off yet.

People are starting to realize that JROTC is saturating urban areas. One in every four public high schools in an urban area has a JROTC unit. In rural areas, it’s one in twenty. The rand Corporation, a major think tank, released a report in 2017 recommending that JROTC turn its focus to smaller high schools in rural areas. That could mean they’re headed to states that haven’t had a big JROTC presence before. Today, the majority of JROTC units are in the South — in South Carolina, for example, there are units at about 60 percent of high schools.

BH
Another concern is the “Armed Services Vocational Aptitude Battery” (ASVAB) test. The Department of Defense administers the test in schools throughout the country. Results of the test provide recruiters with personal and academic data for profiling and potential outreach to students. This information allows them to decide if they want to pursue a particular young person for recruitment. If a student’s profile meets a recruiter’s needs, he or she is often contacted by letter or phone call. Often, parents are completely unprepared to confront that kind of attention directed at their child from a recruiter. It’s very troubling.

The fact that each student’s ASVAB data automatically goes to the Department of Defense for profiling and recruiting is unacceptable. We want to change this procedure throughout New York State. New York City implemented a revised ASVAB directive in 2016 requiring the parent and student to sign and return an opt-in form, giving permission for ASVAB results to be shared with the military. We are working on implementing a similar ASVAB directive in the entire state, to ensure that families are in charge of their ASVAB data.

About eight years ago, I reached out to almost every guidance counselor in the state, asking what they knew about the ASVAB. Mostly, they couldn’t care less, which was quite interesting. They had so much on their plates. Progress was slow with them. And, of course, many of them have principals who are ex-military. I was surprised to find out how many retired military officers become high school principals.

SK
I think activists can be successful at preventing new JROTC units, but, of course, they have to know when and where new units are being proposed. In the 1990s, activists used Freedom of Information Act (FOIA) requests to get lists of schools that had been targeted for possible new JROTC units. We need to do the same thing today. That will give us a road map.

There are other weaknesses, too, like enrollment. To get federal funding, schools that have JROTC units have to keep enrollment above a certain minimum. Usually, no one notices when they fall below that minimum, so they carry on, in violation of the law. But, again, you can use FOIA to figure out enrollments at various schools, identify which units are under-enrolled, and push to get those eliminated.

RJ
The military’s involvement in public schools is not just for the purpose of recruiting bodies. It’s for recruiting minds as well.

The military’s values are being taught in schools across the country. That should scare anybody in this country who is dedicated to working for progressive social change. Those kinds of activities undermine our ability to mobilize people later on in life. That’s the greater danger than just having recruiters go to schools to fulfill enlistment quotas. It’s something we all have to be afraid of.

More resources on JROTC and school recruitment can be found at the website of the National Network Opposing the Militarization of Youth: www.nnomy.org.