Careers in Peacemaking and Social Change 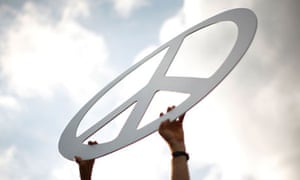 Why Am I A Peace Activist? Why Aren't You?

Written for the collection, "Why Peace?"

More than any other description, except for perhaps husband and father, I have been for the past six years a peace activist. Yet, I hesitate on the question of how to tell my personal story of experience with war. I recently visited Afghanistan briefly, in order to speak with people who have experienced war. I've spoken with many U.S. soldiers and non-U.S. victims of war. But I have no experience of war. Being in Washington, D.C., on September 11, 2001, doesn't change that; by the time a crime had been transformed into a war, the war had been moved elsewhere.

I know a Vietnam veteran who opposed that war but grew so tired of being told he wasn't qualified to do so that he joined up. When he got back, and for decades since, he's been opposing wars with the benefit of the aura of someone who knows war. I don't have that, and I certainly do not want it. I value war opposition by those who have known war, but I value other war opposition as well. And I imagine we can all spot the fatal flaw in any proposal that would have people experience wars before they could oppose them. In 2006 a congressional candidate and Iraq veteran in Ohio who was speaking on a panel with me urged military "service" on all politicians so that they could oppose militarism with greater knowledge of the military. Raise your hand if you think that would work.

So, the obvious question is probably how I became a peace activist. To my mind, however, the question has always been why anybody is not. I understand there are not a lot of job openings for professional peace activists, but there are unlimited part-time volunteer positions.

When I was a kid growing up in Northern Virginia in a family that had no one in the military and no one opposing the military, we had a guest visit. He very much wanted to see the U.S. Naval Academy in Annapolis, Maryland. So we drove him over there and showed him around. He was quite impressed. But I became physically ill. Here was a beautiful sunny town full of people enjoying life and people being trained to murder other people in large numbers. To this day I cannot imagine why I need a particular explanation for finding that unbearably revolting. I want to hear an explanation from someone who doesn't find it so.

Oh, they'll tell us, we all find war to be troubling, but being a grown up means having the stomach to do what's needed to prevent something worse.

The thing is, I never much trusted grown ups. I wasn't revolted by the idea of war for myself, while willing to let others engage in it. I refused to take it on faith that such a horror as war could be justified -- for anyone. After all, like all kids, I had been taught to work out problems with words rather than fists. I had been told that it was wrong to kill. And, like almost all people, I was viscerally inclined to resist the idea of killing anyone. If I was going to accept that in some cases it was right to kill lots and lots of people, and that it was right to always be training and building a huge war machine just in case such a situation arose, then someone was going to have to prove that claim to me.

In my experience, common wisdom was often wildly wrong. A huge industry of churches was maintained on Sundays to promote ideas that my parents took seriously, and most people took seriously, but which struck me as utter nonsense. The idea that war was peace came to seem to me so nonsensical on its face, that I'd only believe it if offered proof. Yet, all such thinking was in the back of my head. I never thought I'd work as a peace activist until the moment I found myself doing so at age 35. It took me years of traveling, studying, dropping out of architecture school, teaching English in Italy, picking up a Master's in Philosophy at the University of Virginia, and working as a reporter and a press person before I found my way.

I became an activist in my late 20s on domestic issues of criminal justice, social justice, and labor rights. I became a professional activist at age 30 when I went to work for ACORN, the association of community groups that scared so many powerful people that it was slandered in the media, defunded, and destroyed several years later, after I had moved on. I protested the first Gulf War and the build up to a 2003 war on Iraq. But I became something of a spokesperson and writer against war when I worked as press-secretary for Dennis Kucinich's presidential campaign in 2004. He made peace the number one issue in his platform. We talked about peace, trade, and healthcare -- and not much on trade or healthcare.

In 2005 I found myself working on a campaign to impeach and prosecute President George W. Bush for lying the nation into war. This meant working closely with and becoming a part of the peace movement, even while engaged in something less than peaceful: seeking to put someone on trial and imprison him. I immersed myself in online and real-world activism, organizing, educating, and protesting. I strategized, lobbied, planned, wrote, protested, went to jail, did interviews, and pressed for peace.

There are downsides and seeming hypocrisy to the peace movement. We don't always behave peacefully toward each other. We don't always share the same vision. Some groups favor peace when doing so helps a particular political party and are otherwise very accepting of war. Some honestly think particular wars are crimes but others justified. Some try to work with corrupted insiders. Some try to bring pressure from outside the halls of power. Some try, with great difficulty, to bridge some of those gaps.

But my peace movement experience overall has been incredibly positive. I've made good friends that I see a handful of times a year, on stages or in streets, and as often as not in police vans. The fulltime peace activists, most of whom have other fulltime paid employment, those who serve no particular organization, but who hold the movement together with their spirit and reliability: these are people with more great stories than any writer will ever get onto paper or computer screens. These are the people for whom, outside of my family, I am most grateful. If any of them had ever been visible in the way that military recruiters and toy soldiers are visible, perhaps I would have found my way to the peace movement sooner.

My focus or approach may evolve, but I cannot imagine ever leaving. In 2009 and 2010, I wrote two books, the second one on the question of whether any war had ever been justified. The title is a giveaway of the conclusion I reached: "War Is A Lie." And it isn't just any lie. It is the justification of the worst thing anyone has ever devised. Ending it now is no longer just a question of making the world more pleasant, but a question of survival. Weapons proliferation, blowback, economic collapse, environmental collapse, political collapse: choose your poison; war will destroy us in one or more of these manners unless we put an end to it. Why in the world would anyone not want to?

Here are some recommended links available to better inform you about careers in Peacemaking and Social Change. This is a work in progress and NNOMY will be adding new documents as they are prepared and as policies change that effect enlistment. Check back periodically.

Websources for Peace Education by Teaching For Peace

Organizations you should know

Articles on the web: