Saying No to Militarism 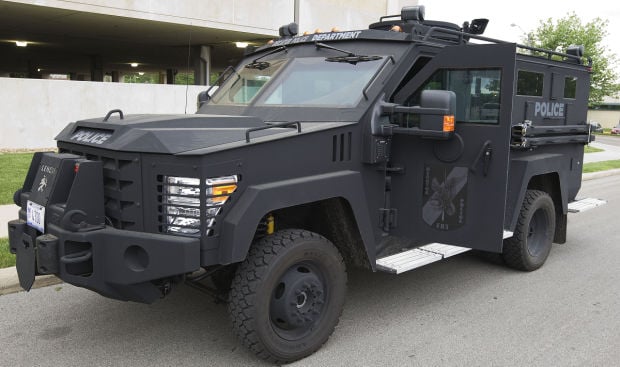 No mail on Saturday, maybe, but small-town police get armored personnel carriers?

Let's take a moment -- in the context of these bitter times, and President Obama's recent austerity budget proposal -- to celebrate the questions the residents of Keene, N.H., are asking their city council about the kind of world we're creating.

First of all, the grotesque insult of "austerity" in the shadow of limitless military spending is destroying our national sanity. And the proposed cuts to Medicare, Medicaid, mental health services, environmental cleanup, National Parks programs and even, yeah, Saturday mail delivery are miniscule compared to the unmet social needs we haven't yet begun to address in this country, in education, renewable energy and so much more. But we're spending with reckless abandon to arm ourselves and our allies and provoke our enemies, and sometimes arm them as well, creating the sort of world no one (almost no one) wants: a world of endless war.

The official 2012 Defense budget of $530 billion, and just a shade under that for 2013, leaves out an enormous amount of defense-related government spending. According to a recent piece in The Atlantic, when you add in, oh, the cost of our wars in Afghanistan and Iraq, our spending on nuclear weapons development (relegated to the Department of Energy budget), Homeland Security, veterans' medical care (inadequate as it is, but rising), military aid to allies ($3 billion to Israel, for instance), and interest on the military's portion of the debt (projected to be $63.7 billion in 2013), our defense spending almost doubles, to $986.1 billion in 2012 and $994.3 billion in 2013.

In the last 13 years, according to Business Insider, U.S. military spending has increased 114 percent. We spend more on the military than the next 15 biggest military spenders combined -- and more than all 50 states spend, in total, on health, education, welfare and safety. In 2007, some $11 billion was simply written off as "lost" in Iraq, the Business Insider story notes.

And the military is, in effect, our 51st state, albeit one surrounded by barbed wire. "The total known land area occupied by U.S. bases and facilities is 15,654 square miles -- bigger than D.C., Massachusetts, and New Jersey combined," according to the article.

And beyond anything that appears on a ledger sheet, the unregulated military has carte blanche to spend the earth's resources and contaminate the planet. "The U.S. Department of Defense is the largest polluter in the world," Lucinda Marshall wrote at Common Dreams several years ago, "producing more hazardous waste than the five largest U.S. chemical companies combined."

This waste includes pesticides and defoliants (e.g., Agent Orange), solvents, petroleum, lead, mercury and, horrifically, depleted uranium and nuclear fallout. The military's legacy -- in Iraq, Afghanistan and Bosnia, where we have fought recent wars; on the tiny island of Vieques, off the coast of Puerto Rico, where the U.S. Navy tested weapons for more than 60 years; and in the Nevada desert and the Marshall Islands, where we tested our nuclear weapons above ground -- is cancer, birth defects and a devastated environment.

All to what end? "National defense" is perhaps the most cynical -- and effective -- lie in human history, commanding the quaking allegiance of the populace over and over again, justifying virtually any activity, devouring the planet's resources, and ever failing to deliver the promised peace, indeed, delivering only the conditions for the next war. Few things in today's world are more unsettling than the fact that "national defense" still owns the country's politics, its budget -- and the minds of far too many of its citizens.

Welcome, then, to Keene, N.H., a town of 23,000 people that, despite its low crime rate and general friendliness, was set at the end of last year to score a "tank" -- actually, an eight-ton Bearcat armored personnel vehicle -- for its police department, thanks to a nearly $300,000 grant from the Department of Homeland Security.

When the news began circulating, the townspeople, instead of going along with the deal, actually stood up to the mayor and city council, not simply questioning the need for this military vehicle (even though it was "free"), but expressing concern that the militarization of the police department could harm their community.

An anti-tank petition garnered 500 signatures, and earlier this month more than 100 people, mostly opposing the tank, showed up at a city council meeting to speak their minds, according to the Keene Sentinel.

"This vehicle is continuing to fund the culture of war in this country, and Congress will continue to fuel the culture of war unless we do something," said Terry Clark, the lone city councilor to oppose the deal, as quoted in the Sentinel. "Do we want a militarized police force in Keene? We can take the lead and ask the council to rescind its decision, and have the courage to do what Congress does not."

In contrast, the Bearcat was defended by the government sales manager for Lenco, the vehicle's manufacturer, as quoted in Huffington Post: "I don't think there's any place in the country where you can say, 'That isn't a likely terrorist target.' ... If a group of terrorists decide to shoot up a shopping mall in a town like Keene, wouldn't you rather be prepared?"

The residents of Keene have so far said no to the fear peddlers. May their stand give all of us the courage to do the same.