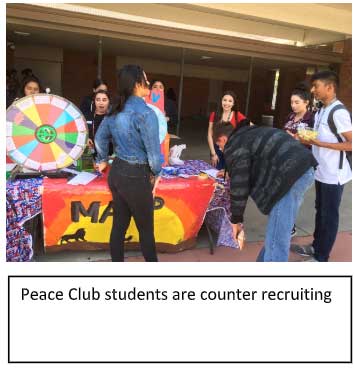 From the suburbs of Los Angeles in Southern California, The Manenberg Artesia AIDS and Peace Project (MAAPP) club at Artesia High School aims to inform our school and community about HIV, and AIDS and promote peace. Our school, for many years, has had an exchange program with Manenberg High School, a township in Capetown, South Africa.

We meet every Thursday at lunch in room 103, and with the help of our teachers and community sponsors, we discuss issues related to peace and current events related to South Africa including HIV and AIDS, and how it affects so many people. Our club presidents Ashley and Diana start every meeting with news updates. Sometimes this includes a report from our sister school in Mannenberg. After school every other week, we go to a Food Bank , which is part of AIDS Project LA and help dispense food for AIDS patients in Long Beach.

This year we participated in the Veterans Day Parade and the Martin Luther King Parade in Long Beach. It was a good experience and we met other like-minded peace club students and had lunch after the march. The mixer was led by peace club students at Long Beach City College so we could organize future plans for the Peace Club Alliance such as summer peace camp.
In November we learned about how the troops are doing in the Middle East, sent holiday cards  and packages to them. We don’t think we should have our US troops over there and we understand how militarism affects our families and loved ones.  Later, we surprised some local students who were immigrants from Central America with a party where we immersed in their culture and had a drum circle together. We had a donation drive and gave them backpacks filled with school supplies and party games, played The Loteria in Spanish and shared our stories.

This year, two students have qualified to go to South Africa for two weeks so they can visit Manenberg High School. They will visit the Sunflower Children’s Ward at St. Joseph’s Hospital. We are collecting donations-mostly toys and school supplies. In March we are getting ready to compete in the annual Peacemaker of the Year tabling competition.  This Peace Club Alliance gathering is sponsored every year by San Pedro Neighbors for Peace and Justice. Right now our community sponsors are teaching us the skills of how to set up a table to promote important causes and we chose homeless veterans for our topic. We want to inform others about the realities of joining the military and challenges veterans face such as being deported ,losing their  housing and want to show how joining in the military can affect their physical and mental health. We were inspired by the story of Martha Garcia, who spoke to our club this year and told us about her son, Jose Segovia, who grew up in Long Beach, but after he was injured in Iraq by an IED, he had PTSD and was deported to El Salvador. We tried to stop his deportation by sending postcards to his representative in congress, but she refused to help the family. It was sad. 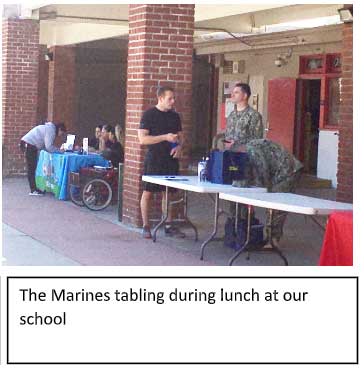 In March we are planning to take our game wheel on campus to let students know what it means to enlist. The recruiters are on our campus and we want students to know both sides of the story. It is close to summer and you can see the Marines on campus on our campus at lunch now. (see photo). We will be tabling on campus next week to get the truth out about what it really means to enlist in the military today. After school is out, we will be participating in this year’s peace camp in the mountains of Orange County for five days.

Overall, our goal is to better the community by educating our students on campus about worldwide issues related to militarism and HIV and AIDS.