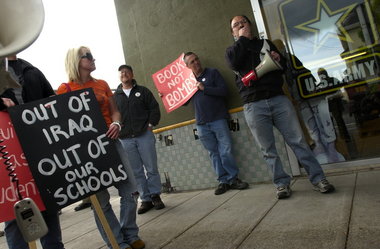 The Portland school board is set to adopt a rule Monday to give "counter-recruiters" skeptical about the value of joining the military the same access to high school students that military recruiters enjoy under federal law.

Instead of standing out on the school sidewalk waving signs and offering fliers, as they have done regularly outside Portland high schools, anti-war activists will be able to staff recruiting tables and hand out pamphlets in the school career center or cafeteria, just like military recruiters in uniform.

"What we want is a balanced account of military service," said school board member Matt Morton, one of at least four board members lined up behind the new rule. "What's key is giving them all the information they need to make good decisions."

The board plans to ask district staffers to prepare an information packet for distribution at every high school to tell students about military recruiting tactics, their right to have their contact information withheld from the military and other post-high school options for students to serve their country, including AmeriCorps.

The chief of recruiting for the Oregon National Guard aid the military has so little access to Portland high school students that any concerns about over-the-top military recruitment on campus are unwarranted.

"We have difficulty making inroads to even get into those Portland schools," said Lt. Col. Cary Miller, chief operations officer for Oregon Army National Guard recruiting. "My recruiting force is a professional force. They're not going to step out of line or lie to kids."

His recruiters have been forced to reach Portland teens less directly, through sponsoring basketball tournaments, staffing booths at festivals such as The Bite of Portland and putting a celebrate diversity-themed float in the Rose Parade, Miller said.

Critics of military recruitment concede that they have no evidence that hardball tactics are being used in Portland high schools these days. But they say they might be.

Beginning in 1995, the Portland school board banned military recruitment in schools, primarily because of the military's discrimination against gays. Then in 2001, the federal No Child Left Behind law mandated that military recruiters get the same access to every public high school campus and to students' addresses and home phone numbers that college recruiters do.

Hence the regular sidewalk protests by members of the War Resisters League, Veterans for Peace and other groups outside Portland high schools, said John Grueschow, coordinator of the Resisters League's military and draft counseling programs.

"We feel that, since the military is required to be let in there, there should be some response" from anti-military recruiters, too, Grueschow said. "We should have the same opportunity they do to present students information."

Board vice chairman Martin Gonzàlez has been the primary force behind getting the rule written and passed, fellow board members said.

The policy is like those already in place in Seattle, San Francisco and other left-leaning city school districts, they said.

Miller, of the National Guard, said he's worried the pro-and-con setup spelled out in the board's proposed rule could make for disruptive episodes in schools.

"To have someone come in and say, 'The recruiters are lying to you,' well, that's not true. I run a tight ship. We are high on integrity and character and value. ... How is somebody who's not in our force and not knowledgeable about what benefits are currently open or available going to say that I am wrong or lying to them?" Miller asked.

"There are people out there who simply don't like the military and don't acknowledge that we in the National Guard have a peacetime mission to help the citizens of Oregon. They'll say, 'You're going to sign up and think you're going to college, but you're going to go to war and die.' That's what they all do."

But Kathy Barker, a PTA leader from Seattle's Garfield High who was a prime force behind Seattle schools' 2007 adoption of a peace-recruiter access policy said it doesn't get ugly. Dozens of times in recent years, she's staffed a peace recruiter table next to the military recruiter table at various Seattle high schools.

When the tables are set up in the career center, often three or fewer students come by that day, and the opposing recruiters spend the day chatting, she said.

When the tables are set up in the cafeteria, students are drawn to check out the side-by-side displays of military benefits and drawbacks, she said.

"There's not the trouble school people thought there would be," she said.

Military recruiters talk up the college tuition assistance, discipline and training that come with enlisting. She talks about the horrors of war and the likelihood of getting locked into an eight-year service contract, she said.

"Often the student might be engaged with both of us at the same time," and often she will counter a military recruiter's line by saying, "Actually, that's not true at all," Barker said.

But, she said, "It's never been nasty or hostile. They are professionals, and so are we."

-- This email address is being protected from spambots. You need JavaScript enabled to view it.