The Permanent Discourse For Endless Wars 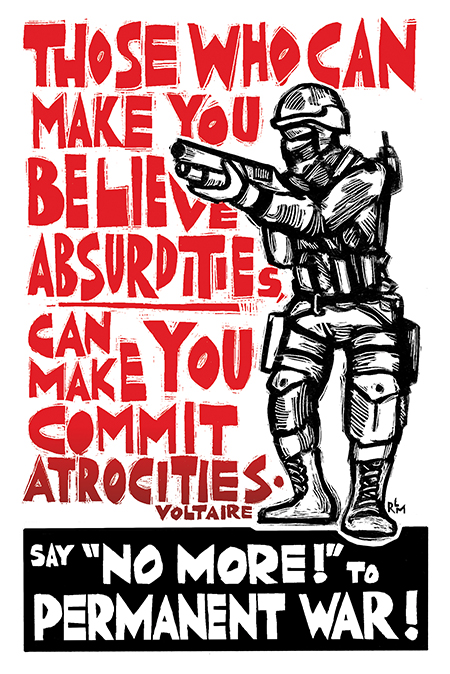 Fabiola Cardozo /  NNOMY / español  - The rhetoric about the need for a military draft in American society is lost sight of in history. The patriotic struggle to defend the nation from possible threats and the urgency to demobilize alleged terrorism attempts and take democracy to other latitudes, has served to implement policies that perpetuate permanent war and make invisible or undermine the possibility of more democratic and pacifist mechanisms in international relations.

Such has been the recurrence of this rhetoric that American society sometimes does not question the actions leading to warfare caused by the government in power. As mentioned in this article:

Yet celebrating the military, nobilizing the military experience, finding purpose and meaning in continuous war, is the very definition of militarism.

A true democracy has a military as a reluctant and regrettable choice, driven by the need to defend itself in a hostile and violent world.

…We’ve become so accustomed to living with the drumbeats of war that we no longer hear them…We’re hearing them all the time today — it’s the background noise to our lives.  For some, it’s even become sweet music.  But war and militarism is never sweet music to a functioning democracy.

Despite the potential that the US has, and that could be developed more efficiently to provide greater social welfare to its inhabitants and the rest of the world through inventiveness and technological innovation, it is a country that has assumed militarism and that seeks to lead with exports of weapons in conflict scenarios on a planetary scale.

In the recent context of Covid, we would take for granted that the priorities for any government would be to care for the infected, the strengthening of the health system and social policies aimed at the most vulnerable sectors, however in the case of the United States, militarism continued to take priority. Since the beginning of the pandemic, virtual work has intensified, and citizens concerned about the growing possibility of unemployment in the country, have shown the best possible effort to adapt to the virtual world and the new demands. This increased presence in the digital field was not unnoticed or wasted by the military sector. On the contrary, it became possible to implement a transformation in the military selection and recruitment process that had already been brewing. A recent articles state:

The service's recruitment system was halfway through a digital transformation that allows recruiters to do their jobs virtually. With the arrival of the pandemic, Navy Recruiting Command accelerated that transformation, and set a goal to convert all of its districts to online operations by the end of the year. The Navy's active enlisted shipping goal for fiscal 2020, which ended Sept. 30, was 39,600 recruits. It ended up with 39,678. (See: https://www.military.com/daily-news/2020/10/16/navy-got-head-start-remote-recruiting-when-pandemic-hit-it-paid-off.html)

Despite the impact of the COVID-19 pandemic, the Army has said it met its fiscal 2020 goal of an active-duty end strength of 485,000. (See: https://www.military.com/daily-news/2020/10/29/houston-army-recruiters-encounter-outrage-hostility-wake-of-vanessa-guillens-death.html)

Not only has a transformation been implemented from the offline world to the online world, the military sector is in constant search and creation of strategies that allow it to consolidate its power, increase recruitment quotas and consolidate a militaristic ideology that does not question costs of violence devoid of fighting. One of the novelties is the application of Buddhist techniques in military training that seek through meditation and breathing to promote what they call mindfulness, a psychological process to maximize concentration, thus improving the performance of the military according to the assigned war objectives.

“We have left out interdependence and compassion and just focused on calm, stress reduction. You could make a more precise sniper better at his function, but without any consideration for the damage he is causing himself or others. In other words, you could just have better trained killers.” (See: https://www.vice.com/en/article/n7vvew/uk-army-mindfulness-ministry-of-defence)

Another valuable element to consider is the economic, social and psychological cost that the permanent war has for American society in general and for those who have participated actively and directly in the hostilities of each conflict.

PTSD (post traumatic stress disorder) “is a mental health problem that some people develop after experiencing or witnessing a life-threatening event, like combat, a natural disaster, a car accident, or sexual assault”. In the case of war veterans, it is very recurrent. According to figures reported by the U.S. Department of Veterans Affairs, the number of veterans with PTSD varies by age of service:

Other factors in a combat situation can add more stress to an already stressful situation. This may contribute to PTSD and other mental health problems. These factors include what you do in the war, the politics around the war, where the war is fought, and the type of enemy you face. Another cause of PTSD in the military can be military sexual trauma (MST). This is any sexual harassment or sexual assault that occurs while you are in the military. MST can happen to both men and women and can occur during peacetime, training, or war. Among Veterans who use VA health care, about:

Regarding the suicide rate, we find the following figures:

All this shows us the devastating consequences that war has for those who must carry it out, this without counting the multiple and disastrous results experienced by those civilians, children, women and the elderly who live in the conflict territories. Add to these ramifications, the harsh impact on the environment and the absolute deterioration of living conditions. However, in political discourse the proposal of endless wars is disguised even if it is still present.