The Militarization of the American Youth (March 1930) 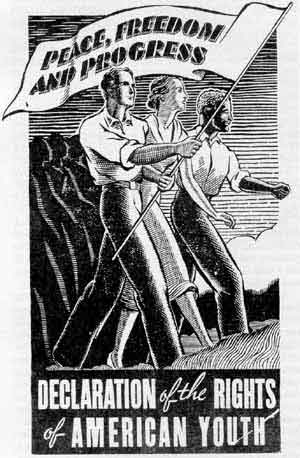 Young Vanguard, The Militant, Vol. III No. 10, 8 March 1930 - A new feature in the militarization of the American youth is taking place in New York. This act, in face of the recent London Conference, and all other peace and disarmament negotiations, belies the attempts of this government to appear as a promoter of peace. A bill has been introduced into the New York State Legislature calling for the conscription of all students between, the ages of 10 and 18 to compulsory military training.

To avoid resentment to this open attempt at making soldiers of the American youth the bill states in its title that it is “Instruction in boy scout training and kindred subjects”. But even such a covering fails to hide the fact that the aim and purpose of this bill is the preparation of cannon fodder for the coming war. As in all forms of military service, the weak and sick are eliminated, and the best physically are allowed the “privilege” of participation, which in this instant would mean compulsion to service.

The bill if passed would mean that all students, regardless of attendance at private or public schools would be forced to wear the uniform, take 30 minutes drill daily, and special training during the holidays, and summer vacation periods.

The passing of such a bill would necessarily set a precedent that would undoubtedly be pursued in other states. At the present moment only the Teachers Union of the State has protested against “this attempt to exploit the children of the state and thus keep alive the institution of militarism”. That however, is far from sufficient.

This particular attempt of the state of New York must be linked with the whole attempt at militarization of the youth In preparation of war. The struggle against war and militarization must be made a mass movement of protest and struggle. To effectively carry out such a struggle, only the Communist and class conscious workers leading the mass of workers can be relied upon. It demands effective organization and propaganda – a feature that is entirely lacking in the revolutionary movement in this country.

The present move on the part of the militarist strata must be viewed as part of the general war manoeuvers, and which will be more and more aimed at a war by the capitalist powers against the Workers Republic of the Soviet Union. Pictured in that light, the fight of the workers must be linked together with the general struggle against war and the brutal exploitation of the capitalist system. The present act is a warning to the working class of what to expect in the near future. It is a forerunner to the further preparation for war thru the attempt at complete militarization, not only of the working class and student youth, but of the whole industrial system of the country.