Editor’s Note: For this article, Isidro Ortiz interviewed Juan Perez, a Marine veteran majoring in sociology at San Diego State University. Juan will be graduating in May 2018 and plans to pursue a career in social justice activism. 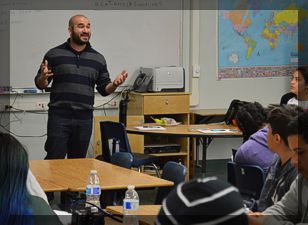 Anti-militarism is often associated with the Baby Boomer generation. Thus, as the generation begins to pass, it might appear that anti-militarism does not have a future. Missed in such an observation is the emergence of a new crop of activists in generations X and Y. Juan Perez is one of those new activists.

Juan describes himself as “woke.” According to the Oxford English Dictionary, “woke” is defined as being “alert to injustice in society, especially racism.” When Juan describes himself as “woke” he is light years away from where he was at the time he enlisted in the Marine Corps during his senior year in high school. Juan grew up as an undocumented immigrant in one of the poorest communities, City Heights, in San Diego. In this community he attended some of the city’s lowest-performing schools. By his own admission Juan was not socially or politically conscious at that time. Indeed, he gave little thought to societal conditions and was “gung-ho” about joining the Marines.

How did Juan become woke? The roots of Juan’s woke lie in an incident during his tour of duty in Helmut Province in Afghanistan. While on patrol Juan’s unit spotted what appeared to be an Improvised Explosive Device (IED). In keeping with protocol, the unit communicated to headquarters, which in turn informed the specialized team charged with IED disposal. Within a short time, Juan’s unit was instructed to verify that the suspicious item was indeed an IED. Verification would require a physical inspection of the item.

Juan and a fellow Marine volunteered to fulfill the verification task. While this at first seemed to be the appropriate action for a couple of gung-ho Marines, it turned out to be more momentous than Juan had expected.

Juan and his fellow Marine approached the suspicious item. Verification, of course, required that the item be physically lifted and inspected.  Without stopping to think about the wisdom of such hazardous and possibly deadly actions, but in keeping with his tendency to follow orders, Juan lifted and inspected the item. He then returned to his post.

That was when he experienced an epiphany. He realized that he had been ordered to carry out a task that could have easily cost him his life. Yet the orders had been issued without any seeming concern for his life. Why? As he pondered the question, his heart began to race. It occurred to him that he had been ordered to undertake the task because “he was just a number.”  All the “semper fi” rhetoric aside, he was “disposable.” Although he was a gung-ho Marine, the loyalty to his beloved Corps was not matched by equivalent institutional loyalty to him.

In that moment Juan joined the company of military veterans who see it as their duty to warn potential enlistees about the reality of military service. In a blog posting for prospective recruits titled, “How Trustworthy Are Military Recruiters,” a fellow Marine writes: “The USMC as an institution doesn’t really care about you as an individual. It cares about what you can contribute to the common mission, to national security, to the team around you, and will spend a large amount of $$$ and time to ensure that you can contribute effectively. . . . The USMC wants you to ‘give until it hurts.’ And then give it more, until you have nothing left. And then, somehow, find even more to give. (Even your life.) At that point you have achieved something that very few people will ever do; be a U.S. Marine, and you will know it. You may choose later to move on to other pastures, perhaps greener, perhaps not, but you will carry away something special inside.”

Juan remains proud of his service in the Marines, but now he carries a new understanding and is walking the “woke” path. In the spring of 2017, he joined the Project on Youth and Non-Military Opportunities and now helps educate young people as a counter-recruitment activist.