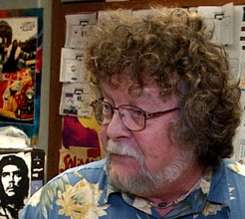 My town borders a military base. Almost all my students have a father or brother or sister serving. In meeting these soldiers, I find they have the dignity of redwoods. To question the premise of our foreign engagements would be like shredding their bark. Yet, teaching war must go beyond the "good-evil" rhetoric of politicians and spin doctors and focus instead on the nuances: How and why do we get into wars? Is war working as a means to resolve our conflicts?

The Danger of Asking Hard Questions

In a neighboring school district, a high school principal refused to allow students to dramatize the United States' military presence in Iraq. The topic, he asserted, was "too sensitive." Authorized classroom conversations and texts related to war tend to be removed by history or geography. The Diary of Anne Frank meets both criteria. Additionally, almost every passage is chillingly intimate, thus making it a popular, albeit still challenged, curricular choice.

Awkward classroom silences and rolled eyes accompany teachers who espouse opinions about war profiteering. The only safe places to discuss, write about, or dramatize war are where everyone agrees with everyone else, or where the instructor has created a climate of trust. Teachers who introduce discussions of contemporary military engagements by the United States risk community blowback. Anti-war talk can be perceived as unpatriotic. Talk radio still pillories Jane Fonda, not for ruining a generation of female knees with her videos on high impact aerobics, but for her anti-war views. The threat is real for teachers who risk asking questions.

In early March [2003], my social studies teacher switched the class topic to Iraq. He said Saddam Hussein's time to disarm was up. We had to get rid of him-he was a brutal dictator who gassed his own people. I raised my hand. I said that the U.S. gave Saddam Hussein chemical weapons, and the CIA helped him find the targets to use them on. My teacher snapped back, "Actually, Charlotte, you're wrong." Then he turned away and refused to call on me again.

Fans of Aldebron's anti-war speech write to her from all over the world. Her ballistic rhetoric, unfortunately, is less popular with a certain Maine middle school teacher.

English teacher and writer, David Spence, uses the storytelling brilliance of PBS's The Great War and the Shaping of the 20th Century, to immerse students in the naked "hatred and hunger" of war. On the companion web site, his students read and listen to poetry that depicts the horror of trench warfare, and click on animated maps of the Allies' withdrawal from Gallipoli. After listening to Wilfred Owen's Dulce Et Decorum Est, students read the British poet's letter to his mother: "I nearly broke down and let myself drown in the water that was now slowly rising over my knees." (PBS)

"Students want to focus on the technology and mayhem, while I focus on larger historical themes and patterns and the human cost of war," writes Kari Lynn Wilson, a high school journalism, English, and world history teacher in Washington State. "In our culture, it's always a struggle to get through the glorification of war in the media (especially in film)." Both Spence and Wilson deftly engage their high school students in the ideas surrounding war.

Words and War: Some Good News

Teaching is predicated on the belief that students can understand their communities and change them for the better. To believe in teaching is to believe in the possibility of peace.

I propose that we give up trying to teach war. The term is a massive honeycomb of inter-related systems imbedded in human identity, culture, and institutions?so complicated that it crushes hope of change. Geoffrey Hill writes, "The burden the writer's conscience must bear is that the horror might become that hideously outrageous thing, a clich?." Given the unimaginable state of global war (with robots!), how should teachers empower students to become agents of peace?

We can attack the roots of war by focusing on vocabulary. Adolescents can and should study totalitarianism, fascism, nationalism, and "American exceptionalism" through rich vocabulary exercises. Vocabulary workbooks are useless, claims literacy specialist and professor at West Chester University, Scott Greenwood in Words Count: Effective Vocabulary Instruction in Action. "There are a variety of rich, deep vocabulary learning strategies out there, all of them rooted in making students active agents in their learning." A lesson I developed asks students to consider 20 images as they define fascism. Then, students use a checklist of 14 Defining Characteristics of Fascism to determine if Camelot, described by Thomas Malory in Le Morte d'Arthur, is a fascist state. By the end of the lesson, students are sensitized to government-controlled media and the use fear to amp up national security--number six and seven on the list.

We might be entering a new age of empathy. Jeremy Rifkin makes a strong case for this in The Empathic Civilization (2010). Watch the 10-minute annotation of his TED video by RSA Animate. To hurry this movement along, Rifkin writes:

[R]eal freedom requires that one exercise vulnerability rather than invulnerability. If freedom is the ability to live out the full potential of one's possibilities and if the measure of one's life is the intimacy, range, and diversity of one's relationships, then the more vulnerable one is, the more open he or she will be to creating meaningful and intimate relationships with others. Vulnerable in this sense does not mean being weak, a victim or prey but, rather, being open to communication at the deepest level of human exchange. (Huffingtonpost)

Traditional memorization of facts and competition are based on ideas that emerged during the Age of Reason. By "revising curricula by introducing distributed and collaborative learning models into the classroom" educators are moving us into the next age.

Virulent adoption of new media and communication technologies by teens may be accelerating teens into "The Age of Empathy" writes Rifkin. I recommend that you have your students watch the online video, War Photographer. The filmmakers attached mini-cameras to photographer James Nachtwey as he records the impact of wars on third world families. Every frame is compelling and inspiring.

There is less art in the mini-documentary, This is War (2010), which follows a marine into combat and a back home. However, both War Photographer and This is War show what is possible with low cost cameras that are increasingly accessible to students.

Adolescents, of course, can create their own documentaries. Tomorrow, in Central Ohio, senior Elizabeth Vaziri will premiere her video about Columbus Academy alumni who were killed or injured during military service.

Middle and high school students in the D.C. Everest School District have compiled oral histories of veterans and have published them as books. Their mission is "to ensure our survival as a free nation through the development of enlightened citizens."

In The Political Mind: Why You Can't Understand 21st C. American Politics with an 18th C.  Brain, cognitive linguist George Lakoff posits that we can transform thinking by reframing the metaphors we use to conceptualize the world. Lakoff notes that the Bush administration referred to 9/11 at first as a "crime," necessitating "police actions." Then, famously, the crime was reframed as the beginning of a "War on Terror," necessitating "military action." (Huffingtonpost) Ultimately, Lakoff does not object to the use of metaphors; his challenge, however, is for teachers and students to rethink the metaphors which shape conversations on important issues.

War metaphors dominate how we think and argue, as "I shot his argument down" or "He tried to attack my notion of..." illustrate. In The Argument Culture: Moving from Debate to Dialogue (1998), linguist Debra Tannen suggests alternatives to framing public dialogue as diametrically opposed -- warring -- sides. Encouraging classroom discussions that involve collaborative inquiry and problem solving is a way of creating a future culture that is less adversarial and more able to negotiate problems before they erupt into armed conflict.

A movement towards civility in public discourse emerged last month when a quarter million people attended Jon Stewarts' Rally to Restore Sanity on the Washington, D.C. mall. One sign read: "I disagree, but I'm pretty sure you're not Hitler."