Last year, Henry F. Moss Middle School in Bowling Green, Ohio, offered students a brand new course. And, as a headline in the local newspaper proclaimed, this was “not your traditional class.” For starters, the teacher—an army sergeant—had told the Bowling Green Daily News that one of his goals was to expose these seventh- and eighth-graders to “military values” that they could use as “building blocks” in life. To that end, students in the class earn military style ranks, engage in army-style “PT” (physical training) and each Wednesday, wear camouflage pants and boots.

This is the Moss Middle School Leadership Corps, part of the growing trend of military-style education for pre-adolescents.

Middle school military programs are younger cousins of the Junior Reserve Officers’ Training Corps (JROTC), a Pentagon program taught by retired military officers and present in more than 3,500 high schools nationwide. Although there are strong similarities with JROTC— military-style uniforms, close-order drills, a curriculum that emphasizes patriotism and military history—the key difference is that JROTC is supported by federal funds and middle school military programs are not, by federal law. That means the continued existence of the middle school programs depends on state or district funding and, in some cases, charitable contributions.

Although the localized nature of the programs and the variety of names they go by—most commonly “leadership corps” or “cadet corps”—make them difficult to quantify, a review of programs by In These Times in more than a dozen states found that there are at least 97 public middle schools currently offering military-style education.

Read more on In These Times

Jovano Graves' parents begged him not to join the Army right out of high school in 2003, when U.S. troops were fighting in Iraq and Afghanistan.

But their son refused his parents' pleas to try college. He followed them both into the Army instead.

"My family, going way, way back, has always felt so proud to be Americans," said Graves-Rivers, who comes from a family in which military service spans six generations, starting with her great-great-grandfather, Pfc. Marion Peeples, who served in a segregated black unit during World War I.

"In our family, there's a deep sense that being American means serving — showing gratitude by giving back to your country," Graves-Rivers said.

Multi-generational military families like the Graveses form the heart of the all-volunteer Army, which increasingly is drawing its ranks from the relatively small pool of Americans with historic family, cultural or geographic connections to military service.

Changing Recruitment Policies in Schools: One Phone Call and Email at a Time 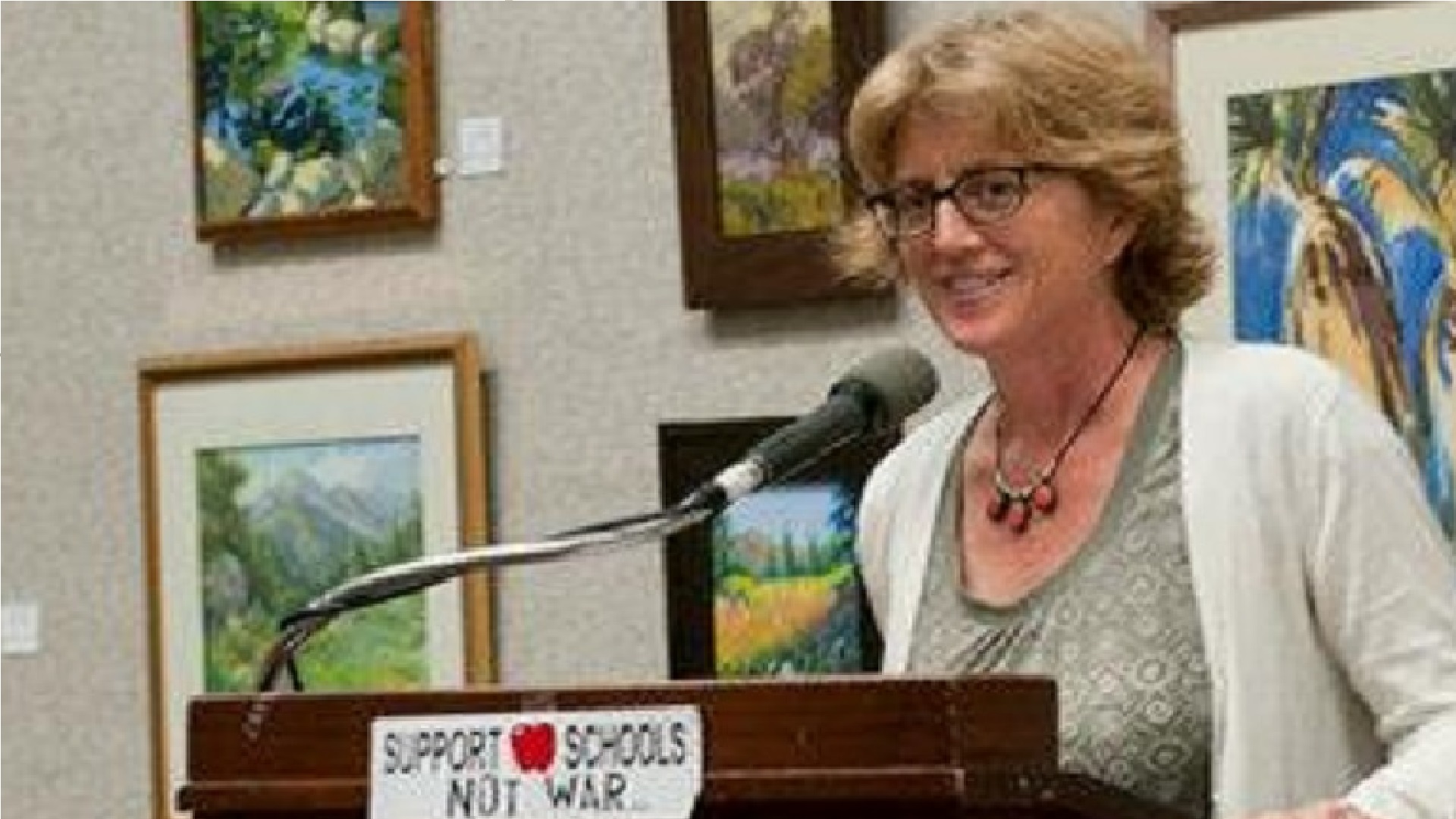 In the spring of 2014, I went to observe a career day at Santa Barbara High School, where my son is enrolled. There were a variety of organizations with representatives and literature tables. The Marines and the Navy recruiters were also there. They were soliciting student contact information. The Marine’s “survey” form included questions such as, “Did you know that the Marine Corps has a $150,000 scholarship?” and “Did you know that the qualifications for the Marine Corps are higher than the standards of UC Santa Barbara?” I told them that under the school’s existing recruiting protocol they were not allowed to get student information directly from students, and that they had to go through the Santa Barbara Unified School District office.

I turned around and saw the school's career counselor and approached him, reminding him about the school's recruiter protocol. He didn’t recall that part of the protocol and said he would talk to the military recruiters about it. I asked, “What about the information they have already gathered from students?” I went back to the Marine recruiters and repeated that they were not allowed to solicit student information. I picked up the surveys they had collected and said that I was going to tear them up and throw them out. They consented, so I ripped them up.

I went to the Navy recruiters’ table and told them the same thing. They had a binder with the protocol in it and looked it up. The Navy recruiter said, "That's correct, here it is, in 'G.'" (G. Recruiters visiting schools shall not at any time solicit contact information directly from students or require it as a condition to participate in an activity or receive an award or gift.) I said, "I am going to take this sign-up sheet and tear it up," holding it up for them to see, and they also said ok.

Read more: Changing Recruitment Policies in Schools: One Phone Call and Email at a Time

Hansel and Gretel at the Military Recruiter

Military recruiters must feel like Hansel and Gretel’s “wicked witch,” fattening up the children to eat them. With sexual violence, endless wars of occupation, fatalities, brain trauma, permanent disabilities and an epidemic of suicides, what they’re selling these days looks like a lot like a bad horror show.

With the chance of being sent into quagmires in Afghanistan, Iraq, Pakistan, Syria, Yemen, Somalia, etc. on one hand, the likelihood of being sexually assaulted on the other three-fourths and the specter of suicide among vets of all stripes¾you have to wonder how recruiters get anyone in the door. Newbies must not be reading the papers; all four active-duty services and five out of six reserve components met their recruiting goals in 2014, according to the Pentagon.

Read more: Hansel and Gretel at the Military Recruiter

MONTICELLO, Fla. — The binder sat open on his adoptive mother’s lap, turned to the page where the scholarship papers lay in a transparent sleeve.

Nik Branham said nothing, holding the phone in its camouflage case close enough that his face glowed. The woman supported her 17-year-old’s plan to join the Army, but she didn’t understand it. These papers were a miracle, as she saw it, college at least partially paid for because of the hell he had survived, a chance at an education and maybe a few more years of football, the game he once loved.

“I done explained everything,” said Alice Branham, a foster parent who adopted Nik and his older sister Ambrosia six years ago, and when the process was complete the state of Florida offered the “Road to Independence” scholarship. In the time since, Alice had come to love him, to become inspired by his confidence and also frustrated by it, to refer to him as a “pit bull”: Once he sank his teeth into a decision, he wouldn’t let go.

“Nobody can change my mind,” he said, and Alice looked away.

In the South, like most parts of the United States, football and the military are cultural siblings — two powerful and venerable forces, brought together week after week for the crowds and cameras. There are anthems and flyovers, shared terminology like “formations” and “blitzes,” pride in home teams and service branches passed through the generations like precious heirlooms.

But beyond the bright lights and choreography, these grand American institutions face frequent and, often shared, criticism: that both are overgrown and unnecessarily powerful, that players and soldiers are trained for games and combat but rarely are prepared for a return to normal life, that football and military recruiters sell a glamorized version of reality — rarely mentioning the shared risks of long-term brain injuries, psychological disorders and a shortage of post-career support.

In Jefferson County, this mostly rural and increasingly poor area in the Florida Panhandle, young people are drawn to the glory, sure, but many of them see football and military service as something more fundamental: a way out. Indeed, surveys have shown Jefferson County — nearly 19 percent of the roughly 14,200 residents here live below the poverty line — as a high per-capita producer of both college football talent and military recruits. An audit of 2013 college football rosters by Mode Analytics found that about one in every 83 boys left the county to suit up for a college team. “We’re definitely a tougher breed,” said DeVondrick Nealy, a Monticello native who’s now an Iowa State running back. -
Read More... 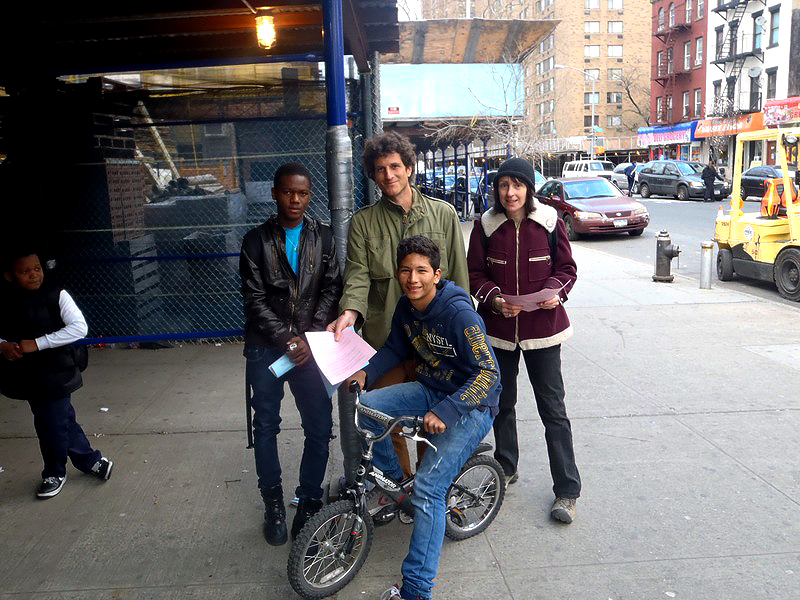 As volunteers handed out flyers to parents and students entering high schools for a meeting with teachers, the White House was deciding to send 1500 more troops to Iraq.

The information being shared with parents includes Non-Military Options for Life After High School as well as Questions to Ask and Points to Consider Before You Enlist.

How very important this action continues to be as wars are endless and new military recruits are needed.  For the military - where best to look than in the high schools.

Reflection on My Time as Project YANO’s Student Intern

In the past nine months as Project YANO’s 2013-2014 student intern, I have learned an immense amount of information about U.S. militarism, its far reach, and counter-recruitment. I have been directly impacted on multiple levels. I have grown mentally through the knowledge I have gained and also personally through the interactions and relationships I have built with youth, advisors, teachers, mentors, and Project YANO supporters, volunteers and board members. I have had the pleasure of working with students who look like me, engaging low-income youth of color who have stories and backgrounds similar to my own.

At the time I began the internship, I had accepted and started working as an intern for another local non-profit organization. I am very grateful to both organizations for the opportunities they have provided me and for the personal and professional growth they have facilitated both for me and in me. I am especially grateful for the fact that both were paid internships, which allowed me the freedom to do work that I enjoy, that I am passionate about, and that is not routine -- because, as I experienced first-hand while I worked at Wendy’s, repetitive work is tiresome work.

When I began, I was very excited to intern with YANO but I was also a bit nervous and scared about successfully balancing school, my second internship, and personal life. From YANO, its board members, program coordinator and volunteers, I learned lessons in non-profit organizing, basic mailing operations, and fund appeal letter writing; strengthened my facilitation, time management, and multitasking skills; and acquired an expanded interdisciplinary view of the world.

Prior to applying for the position, I learned about Project YANO and heard about meetings, workshops, and conferences through board members who also happen to be some of my very close friends. They would say things like: “Oh! Project YANO is doing this and doing that,” and “We decided to move forward with this,” and I would think to myself, “Wow, that sounds awesome! I wonder how and if I can join?” I never actually asked, so when the internship opportunity presented itself I gladly applied.

Reflection on My Time as Project YANO’s Student Intern