Enroll in college and don’t ever enlist in the service 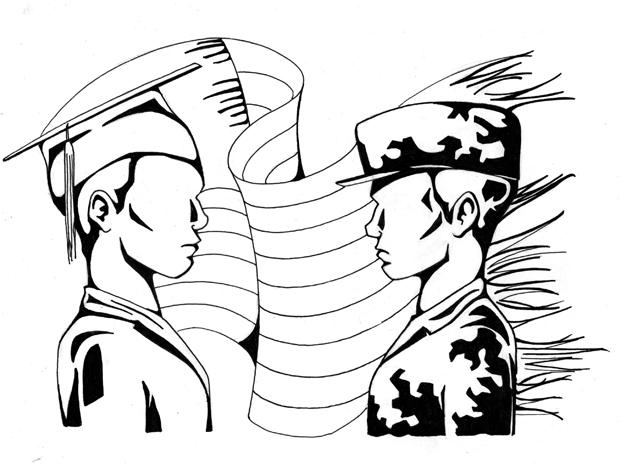 For this Veteran’s Day, I’d like to encourage everyone to honor the memory of fallen service men and women of this country by lighting the American flag on fire and burning down military recruitment centers – so that the cycle of creating veterans can end.

But if that doesn’t seem appropriate (although it really quite is), at least think twice about enlisting.

Recently a young and close family relative enlisted into one of the branches of the military. In order to protect his identity and potential repercussions, I will not identify him.

As a borderline-dogmatic anti-capitalist and anti-imperialist activist, I was fervently against the U.S. military, and I had let this be known to him.

But in spite of all my radical rhetoric, he joined. It made me think: a lot of people in his similar situation join for similar reasons.

Why poor people of color join the military

My father’s company shipped off its manufacturing department, leaving him unemployed. My mother’s company closed its doors and filed for bankruptcy. My other younger brother with a felony on his record, was struggling to get through school and find employment. All while the police patrol the city, with cases of abuse and killings, while jobs continue to decline, while street gangs promise drug money and financial gain, all under the subtleties of racism at school, at the workplace and society at large.

No one should be surprised that the presence of military recruiters on high school campuses are embraced. Coming from poverty and instability, I don’t really know who wouldn’t want to join. Certainly, I thought about it.

The lure of economic stability and paying for college is too great to ignore.

When asked on why he joined, my younger relative echoes these reasons in a more mature and raspier voice.

“I still joined because I did my research and I knew what I was getting myself into,” he said.

However, he encouraged others not to join solely as a way of escaping poverty, poor school performance or other problems, especially if they’re a person of color. They’ll do more harm than good, he said.

“What would I tell someone if they wanted to join?” he said. “Personally, I’d tell them not to join. I think it depends where they come from, what type of family they come from. Like us, our family… A lot of minorities that join don’t do the research. They get fucked.”

He remembered going to boot camp and hearing about several suicide attempts. He remembered seeing recruits with slashes on their wrists and a regular presence of paramedics on camp.

He admits that the military, historically, has a legacy of racism within its ranks but also as an institution. But in spite of this there is a need to compartmentalize this reality and treat his service like any other job.

“I still don’t regret joining but I see how the U.S. has been selfish, racist and taken care of its own interests. That’s the part that kind of bothers me about actually joining but not as much but it still bothers me,” he said.

He sighed. For the first time during the interview there was emotion in his eyes. He sighed.

“Everything’s a job now,” he said.

And why am I upset? This is capitalism. We have to survive. I couldn’t use myself as a great example of financial stability. I got $4 in my bank account, running on fumes until my next paycheck. My monthly income is about $900 from working a few part-time jobs and going to school full-time. It’s well below the poverty level. I don’t blame people for stealing, selling drugs or working shitty jobs.

But I will say this. There are a lot of other opportunities out there that don’t have a racist and imperialist legacy to them, which may make you into a killer. Personally, I’d rather flip burgers for the rest of my life than potentially take someone else’s for the pursuit of a paycheck.

Militarism is part of American culture

When I went to Van Nuys High School, I remember taking the ASVAB test. Most of us didn’t understand what it was, and no one offered any explanation, other than it was an aptitude test.

It wasn’t until years later that I found out it was a test offered by the U.S. Department of Defense to measure enlisting qualifications. ASVAB stands for Armed Services Vocational Aptitude Battery, and was administered in many high schools. It still is.

I spoke with another active duty service member whose identity will remain anonymous in order to protect this person’s position, and according to him the U.S. Department of Defense contacts the Department of Education with the test and then the schools administer the tests to students.

The federal budget for the military is about 19 percent, according to the Center on Budget and Policy Priorities. However, the discretionary budget, which is what is voted on by lawmakers each year, is different from mandatory spending. Programs like Social Security and Medicare are mandatory. Mandatory accounts for two-thirds and discretionary is one-third. In actuality, the military accounts for 57 percent of discretionary spending, according to National Priorities.

The service member is aware of the pressure and the concentrated effort by recruiters and the military. But it’s needed.

“I don’t think that the government should force young kids to go into the service,” the service member said. “But we do need the younger generation. They are the fighting force that builds the military.”

When I asked what he meant he said simply with the nonchalance and neutrality of solving a math problem that there are thousands of positions that need to be filled.

“There’s a high loss from retirement, combat and suicide,” he said.

According to NPR, the number of military suicides have surged to 349 last year, surpassing U.S. military combat deaths. Additionally, 22 veterans take their own life every day according to the U.S. Department of Veterans Affairs.

Want honor, respect and to uplift your community? Go to college

If you’re rich, if your people have high numbers getting educated and successful, if your people have low representation in prisons, then I’d understand why you’d want to join the military: patriotism, to further protect a country that has given you so much, that has been so good to you and your people. It’s a matter of self-preservation and interest, really.

Learn to be a veteran of a different struggle, a struggle for increasing the numbers of people of color in graduate school, in Ph.D. programs, in organizing communities to stand up for themselves and fight for justice, and break the cycle of state violence.

I promise you a mother will be more proud of the next Pan-African studies major graduate on his or her way to a Ph.D. who organizes to fight for the rights of others. She would be more proud of that, than a returning service member from a war that has cost both sides thousands of lives, that has soaked up government funds that otherwise could have gone to education, social services and other areas much in need.

Kevin Baker, 28, an Iraq war veteran of the U.S. Army was 18 when he enlisted. He encourages young people not to join, especially young people of color.

“I think that if you go to Beverly Hills High School and see recruiters there and then go to Compton High School you’ll see a stark contrast. And if that’s not targeting poor communities I really don’t know what else would be,” he said.

But it’s not just young people of color that are being targeted by military recruiters. It’s poor people in general.

In spite of that, people have to think long and hard about enlisting.

“For young people who don’t have jobs, who don’t have money for college, join a specific movement that puts the energy somewhere else. It’s difficult at times but it’s not as difficult as committing actual war crimes, and then coming back and shooting yourself in the head. I mean, that’s the reality.”