Rick Jahnkow works for two San Diego-based anti-militarist organizations, the Project on Youth and Non-Military Opportunities and the Committee Opposed to Militarism and the Draft. He can be reached at: This email address is being protected from spambots. You need JavaScript enabled to view it.

School violence: a result of bad parenting or militarism? 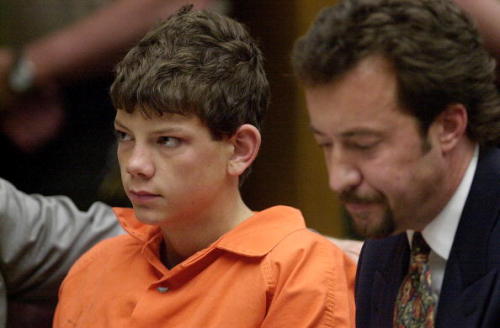 High profile school shootings in the US have been the inspiration for much popular discussion about the causes of youth violence in recent years, with everyone—from bad parents and corrupt teachers, to rock stars—being blamed. Rick Jahnkow argues that while the motivation for such shootings may be complex, one causal factor in particular is being ignored—militarism.

Rick Jahnkow - (Reposted from a 2001 feature in the United Kindom's Peace News in light of the increase and regularity of school shootings now being experienced in the United States.)

When a student takes a gun to school and goes on a shooting rampage—as one 15-year-old is charged with doing in a community near me in California— the public immediately expresses its shock and confusion over how such a thing could ever occur.

Educators, politicians, and the mental health professionals who are called upon to deal with tragedies of this sort all struggle to come up with a plausible explanation. Usually, their attention focuses on narrow, individualistic conditions that might provoke such a violent outburst. The American Psychological Association's brochure, Warning Signs of Teen Violence , advises us that factors which contribute to teen violence include:

Signs of a Coming Push to Further Militarize Schools

In May 2013 the Military Times newspapers carried an article titled, “Services Prepare for Scant Recruiting Year.” It began with the following sentence:

Finding recruits to join the military in 2014 could be increasingly challenging, even with declining recruiting goals, defense and service personnel officials are warning Congress.

It went on to say that it is hard to see the problem because the active-duty military has been meeting its goals for quality and quantity of recruits, but then the Army Reserve missed its goals in the first quarter of fiscal 2013. The article also reported that on April 17, Jessica Wright, acting undersecretary of defense for personnel readiness, warned the Senate Armed Services Committee of a possible future recruiting problem due to the improving economy.

Wright’s statement to the committee pointed out that “a slow economy makes recruiting less challenging,” but “signs of economic improvement” could soon end the current optimistic recruiting environment and, together with other factors, lead to recruiting difficulties.

The Military Enlistment Opportunity Act: a New Kind of Draft? 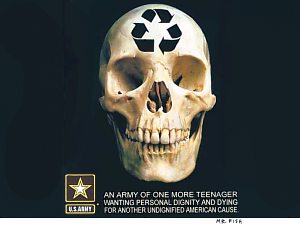 It’s well established that many people who join the U.S. military do so because of their economic status. It could be that they do not see options for a civilian job that pays a livable wage, they cannot afford health insurance, or they believe they’ll never be able to go to college without financial aid from the Post-9/11 GI Bill. Whether this belief is accurate or based on an individual’s limited awareness of alternatives, military recruiters are effective at exploiting economic predicament to meet their monthly quotas. Many of us refer to it as economic conscription or the “poverty draft.” It is the reason why counter-recruitment groups spend much of their time and energy gathering and distributing information on alternative sources for job training and college financial aid.

The Gun Problem No One Talks About: Shooting Ranges in Schools 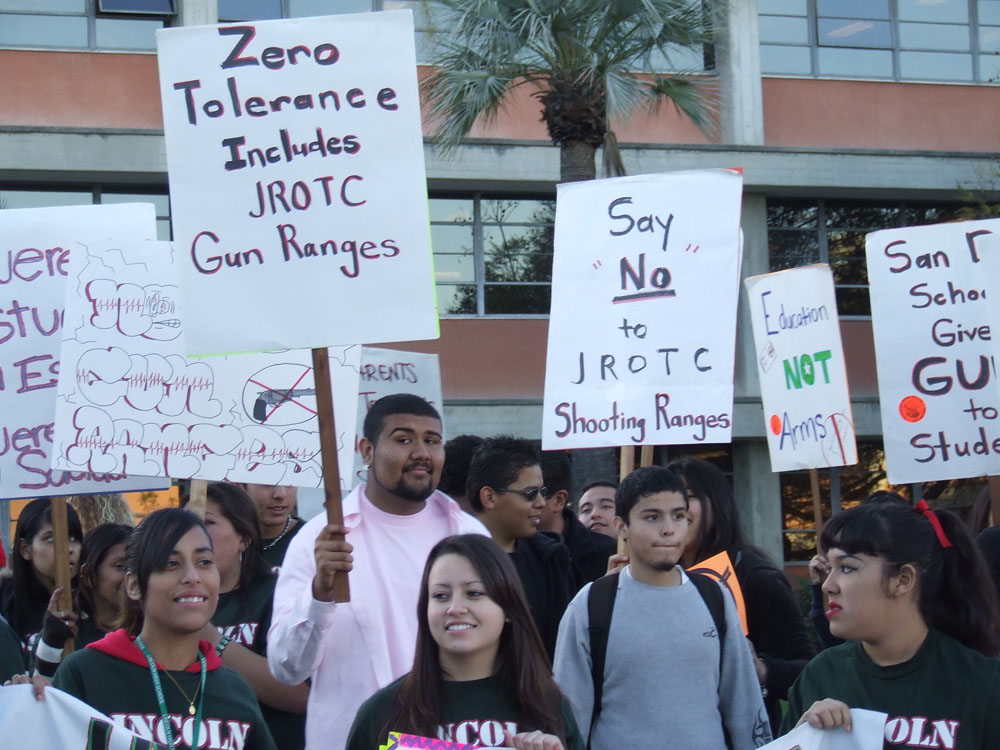 Just about everyone views the National Rifle Association as the leading champion of gun culture in the United States. When there is a mass shooting — even one as outrageous as the attack at Sandy Hook Elementary — we have learned to expect the NRA to uncompromisingly oppose any government response that would limit the rights of gun owners.

Schools, on the other hand, are viewed as the daytime guardians of our children and are expected to have an equally uncompromising stance against weapons and violence. Zero-tolerance policies commonly allow for the expulsion of a child just for bringing a toy resembling a weapon to school, and students are typically barraged at school with messages against joining gangs and using violence to resolve conflict.

Surely it would be inconsistent, then, if schools were to sponsor programs designed to acclimate kids to violence; and we certainly wouldn't expect them to be actively teaching students the skills needed to become shooters. That would be incredibly absurd, right?

Unfortunately, that is exactly what is happening in a large number of our high schools, where local school districts and the Pentagon are co-sponsoring Junior ROTC marksmanship training.

Think about it: a child can be disciplined for bringing a squirt gun to class, but school officials and the Pentagon get a pass when they train students to use rifles with shooting ranges inside our schools. And despite the dangerous implications of giving such a mixed message about guns to young people, this program receives little or no critical attention from the media, politicians or gun control groups who are protesting school shootings and societal violence.

For those of haven't heard, there are now approximately 3,400 secondary schools with units of the Junior Reserve Officer Training Corps, a military training and recruiting program open to students as young as age 14. Founded in 1916, it is operated jointly by the host schools and individual military branches. Instructors are retired officers employed by the local school district. Over half a million students are enrolled in the program and attend daily classes that teach them military customs and demeanor. They are assigned ranks, required to wear uniforms at least once a week, learn to march, and study history, civics and other subjects from Pentagon-supplied textbooks. Students are graded according to how well they can demonstrate that they have internalized military behavior, values and culture. Unlike college ROTC, there is no military obligation with JROTC; however, according to testimony in Congress, 30%-40% of JROTC cadets eventually join the military.

Read more: The Gun Problem No One Talks About: Shooting Ranges in Schools

When the military comes to your local high school, you have a legal right to give students an opposing view.

This has been the position taken by federal district courts in Florida, Pennsylvania and Illinois and two federal appellate courts. The most broadly-worded decision came from a case that COMD took to the Ninth Circuit Court of Appeals in the 1980s. Here is the background:

Until 1986, COMD was named the San Diego Committee Against Registration and the Draft (CARD). In 1983, CARD attempted to place anti-draft registration ads in numerous high school newspapers around San Diego County. Student journalists at most of the schools published the ads, but administrators in the Grossmont Union H.S. District banned the ads from all of its student newspapers. San Diego CARD felt it was the students’ right to decide the issue, but since they weren’t going to be given that right, we filed a lawsuit against the Grossmont district in federal district court, citing violations of our First and Fourteenth Amendment rights. We requested a preliminary injunction from the court to suspend the ad ban while we waited to see if a trial would be necessary. The district court judge in San Diego refused to issue the preliminary injunction and we appealed his decision. 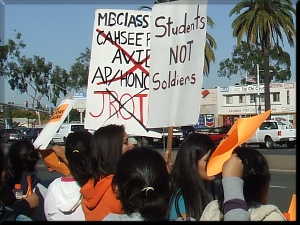 Students at Mission Bay High School in San Diego are now celebrating what amounts to a very rare organizing victory: the expulsion of a Junior Reserve Officers Training Corps unit from their school. The accomplishment is especially remarkable given that it happened in an area with one of the largest concentrations of military personnel and war industry in the world. San Diego County, with over 100,000 active duty sailors and Marines, has a Department of Defense payroll that frequently tops all other regions in the U.S. It’s not the sort of place where you would expect a rejection of anything military.

There are more than 3000 high schools in the U.S. with JROTC, the Pentagon’s high school military training and indoctrination program. Over the years, those who have objected to having such courses in their schools have learned that when a JROTC unit gets established, it is almost impossible to remove it with a campaign of protest directed at school administrators and governing boards. The reason is that once JROTC is present, the cadets — who are organized in military ranks — can be used as a lobbying force that will intimidate even the most anti-militarist school board. Activists in San Francisco, for example, have failed in multiple attempts to eliminate the program.

Counter-recruitment and School Demilitarization Activism: From Past Victories to the Challenges Ahead

Counter-recruitment and school demilitarization work in the U.S. has gone through several cycles of expansion and contraction during the last few decades. The first expansion was during the early 1980s when it was supported by a small number of national organizations, such as the American Friends Service Committee (AFSC), War Resisters League, Central Committee for Conscientious Objectors (CCCO) and National Lawyers Guild. Most grassroots activities at the time were carried out by chapters of these organizations and a number of independent community peace groups (including COMD and, eventually, Project YANO).

Many counter-recruitment organizers in the 1980s came from the Vietnam-era anti-draft movement, so it was common for them to include draft counseling information as they also worked to counter the presence of military recruiters in schools. This dual emphasis was encouraged by the return of Selective Service registration in 1980 and the government’s various efforts to coerce young men into compliance. Frequently, organizers saw no distinction between the issues of recruiting and Selective Service registration, which had both positive and negative consequences. It was positive in the sense that fear of a possible return to the draft fueled more youth-focused organizing and helped increase awareness of recruiting and militarism in schools. But on the negative side, the frequent focus on Selective Service kept many activists from fully comprehending that economics had become the primary factor driving the militarization of young people, and that draft counseling was not an effective approach to the problem. Another negative consequence was that as concern about conscription diminished in the late 1980s, the overall level of counter-recruitment work also fell considerably.

Read more: Counter-recruitment and School Demilitarization Activism: From Past Victories to the Challenges...