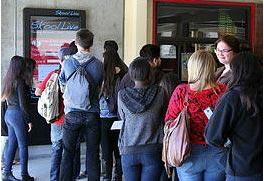 Imagine then, the Pentagon's keen interest in a plan by upstart SkoolLive LLC of Fallbrook, CA to install thousands of giant 6-foot i-phones with flashing, screaming, streaming interactive screens in thousands of high school hallways across the country. These life-size digital kiosks allow kids to directly upload their personal information without having to deal with school policies or state and federal laws! The company has agreements with more than 2,000 schools in 27 states and intends to triple that number, according to press reports.

According to SkoolLive, school officials allow the free installation of these devices because they are convinced the gadgets "enrich a student's school experience by replacing mundane printed posters with high quality digital ads that require less space, reduce visual clutter, move schools into the digital age, and saves tons of time, money and trees."  http://www.skoollive.com/#!about-us/mainPage But these officials may not be seeing the entire picture. From the screen of the SkoolLive website directed toward potential advertisers, "The SkoolLive Kiosk screens are touch sensitive. The feature allows the company to offer "interactive" ads. With this interactive feature, advertisers are able to conduct student surveys, determine product preferences, enter contests, send text messages containing promo codes, discount coupons, etc. Our proprietary software captures and analyzes this valuable data, providing advertisers the analytics and feedback necessary to effectively measure audience acceptance as well as the effectiveness of their ad."

The placement of these SkoolLive kiosks may, however, circumvent The Family Educational Rights and Privacy Act (FERPA). Generally, the law states that schools may disclose information such as a student's name, address, telephone number, etc., but the schools are required to allow parents to request that the school not disclose information about children. Many state laws go even further in protecting student rights. By allowing the placement of these giant interactive kiosks, schools, in essence, may be allowing the transfer of student information without providing for parental consent.

The law says schools shall provide, upon a request made by a military recruiter, access to the name, address, and telephone listing of a high school student, unless the parent submits a written request, to the school, that the child's information not be released. Schools must notify parents of their right to opt out. SkoolLive's kiosks remove the role of the school and allow the military to extract information directly from unassuming minors.

Not only that, but schools stand to make thousands off of each kiosk per month, the company claims, depending on the marketing dollars each generates, although SkoolLive may be exaggerating the income potential of the 6 foot i-pads. SkoolLive officials apparently told Chris Marczak, assistant superintendent of Oak Ridge High School in Tennessee, the company had estimated each kiosk could generate between $2,000 and $5,000 monthly for each of its schools.

The interactive capability is sold as a way for students to access more information about a particular notice or event. Need to know more about purchasing high school rings or yearbooks? Click here. Want to leave your contact info for an advertiser to get in touch? It's simple!

Want to know more about jobs in the Army or more specifically, how to find out more about taking the military's enlistment test, the Armed Services Vocational Aptitude Battery? That information is readily available is a slick, colorful, interactive format in high schools across the country and it may be coming to a school near you. SkoolLive describes the Army's use of their interactive kiosks this way, "The Army wanted students to be aware of Army career options while learning student preferences. As a part of their Career Exploration Program, the Army ran a full-screen video interactive career survey. Students entered their grade, selected their career preference and registered to win one of three prizes given away monthly. Winners were showcased in a follow up ad.

Jim Metrock, of Birmingham, AL heads Obligation Inc., http://www.obligation.org a brilliant public interest group that opposes commercialism in schools. "A captive audience of school children is very attractive to advertisers," he said. "This is taxpayer-funded school time, and it doesn't make sense that companies can buy time to have with students." Nonetheless, SkoolLive's venture is much in line with the corporatization and militarization of America's schools. For more information on the role of the military in SkoolLive's business plan, contact Armed Forces Representative MAJ (Ret) Jason C. Hall, This email address is being protected from spambots. You need JavaScript enabled to view it.