Coalition of the Unwilling 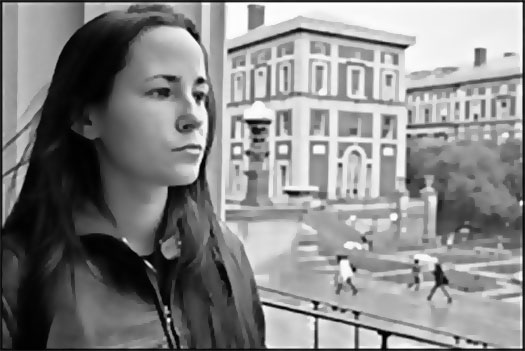 25/10/2005 / Anya Kamenetz / Village Voice - One Saturday this summer, Monique Dols, a Columbia University senior and a national leader of the Campus Antiwar Network (CAN), saw again why she has been working so hard to reach potential military recruits. “We were handing out flyers for an event with the brother of a military resister,” Dols says of that day in Washington Heights. “Three 16-year-old [ROTC] cadets walked by in full military uniform. We started talking to them, and it turned out they were completely against the war. They had joined because it was an after-school program that provided structure and something for them to do. The priorities of a society that puts millions into military recruitment and continually cuts funding for after-school programs, that’s backward, and that’s the reality people are responding to.”

When this column first covered counter-recruitment in January, the movement was a scattered, grassroots phenomenon, led by old-guard lefty organizations like the Central Committee for Conscientious Objectors and Veterans for Peace. Since then, public opinion has turned decisively against the war in Iraq, and the active-duty army fell 8.5 percent short of its recruiting goals in the period that ended September 30, its worst year since 1979; the National Guard and army reserves did even worse. Counter-recruitment is growing into a truly broad, multigenerational, national movement that serves as a model for how diverse constituencies on the left can and should work together.

On November 17, the National Youth and Student Peace Coalition, another group formed after 9-11, will hold a National “Not Your Soldier” Youth and Student Day of Action. Another group called Not Your Soldier plans six regional weekend counter-recruitment workshops this year for teenagers. And on the weekend of October 22 and 23, the movement saw its first major national conference in Berkeley, California, co-sponsored by CAN and Military Out of Our Schools (MOOS), a Bay Area coalition.

An estimated 600 attendees from the Bay Area, the Northeast, and the Midwest, and even Katrina-affected students from the South, heard speakers and participated in workshops on how to spread the message that the military’s promises can be misleading, and that kids do have other options to get jobs and pay for college. “I’ve been organizing in one capacity or another for over 25 years and I’ve never noticed something pick up and take off so quickly,” says Susan Quinlan, a conference coordinator with MOOS. “The vast majority who are involved right now never did it before this past year. It’s really just exploded into a lot of different communities.”

A key concern drawing new people to the cause is the 2002 No Child Left Behind Act, which requires high schools to provide student contact information to military recruiters unless families opt out. Three prominent progressive organizations—Mainstreet Moms, Working Assets, and the community organizers ACORN—have banded together to create Leave My Child Alone (leavemychildalone.org), an online campaign aimed at parents. At the Berkeley conference, “Main Street” moms, teachers, and principals rubbed elbows with high school and college students, young Iraq war veterans, and members of military families, as well as longtime peace activists. “We’d like to be an example to the rest of the left in terms of how to organize broadly even when there are differences,” says Snehal Shingavi, a UC Berkeley grad student who helped organize the conference. Their ultimate goal, of course, is to give youth in the most affected communities—read: minority and working-class—the information they need to resist recruiters. For Shingavi’s school group, that means staffing outreach tables at Vista Community College and Laney College, near Berkeley, as well as on their own campus.

Josh Karpoff, an engineering student at the Rochester Institute of Technology and a national organizer for the Campus Antiwar Network, felt the new energy on September 24, when he joined in the Iraq war protest in Washington, D.C. “Our College Not Combat contingent had 3,000 people marching in it, from chapters all over the East Coast. This was one of the biggest things that the Campus Antiwar Network had ever organized.” Karpoff adds that anti-war sentiment is burgeoning even on his relatively conservative campus, where defense contractor Lockheed Martin is a major presence. When the marines recently showed up to tout an officer candidate program, student activists swarmed their table with counter-recruitment literature. The recruiters packed up and left within 45 minutes.

Small victories like those are fueling this movement. But activists also have their eyes on the prize: a recruiting drought so bad that it forces the administration to close the door on the war. “Why are the recruitment numbers so bad this year, as opposed to 2002–2003?” asked Shingavi. “It’s a combination of the fact that the war is unpopular and that you have a real movement giving people information about other opportunities available.”