Pittsburgh Stands Up to Military Recruitment on "National Stand Down Day” 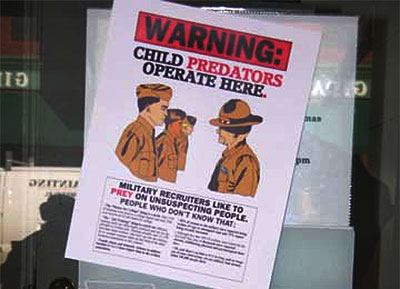 18/11/2005 / Pittsburgh Organizing Group / pittsburgh.indymedia - On Friday, November 18th, Pittsburgh Organizing Group (POG) held a noisy but non-violent protest outside a military recruiting station in Oakland. About 50 individuals turned out over the course of two hours in sub-freezing weather to the station where police attacked non-violent protesters with tasers, pepper-spray and police dogs on August 20th. Today's was POG's 15th trip to the oakland station since the group launched a counter-recruitment campaign last May.

A steady beat of drums, whistles and chants were among the ways protesters "turned up the volume" at today's protest, One activist left a warning on the closed and locked entrance to the recruiting center that read, "Warning: Child Predators Operate Here." The Pitt student group, Pitt Against the War (PAW), also maintained a sizable and loud presence at the picket.

Several unidentified men--presumably plainclothes officers--occupied an empty floor across the street from the recruiting station and videotaped and photographed everyone in attendance.

Today's protest was part of "National Stand Down Day," a national day of action sponsored by the Iraq Pledge of Resistance (http://www.iraqpledge.org), named after a "stand down" day this past May 19th, when the US army was forced to close its recruiting stations after several hundred well-documented cases of recruiter malfeasance came to light. All told, 15 cities held protests--some committing acts of civil disobedience––at recruiting centers where young Americans are being enlisted to kill and die in an unpopular war with no apparent end in sight.

POG members say they plan to continue to protest the Oakland recruiting station and will soon announce their next date. 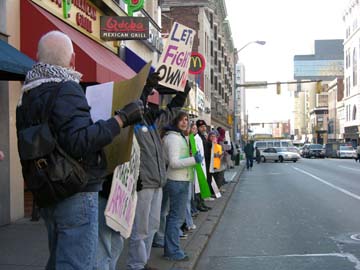 Other components of POG's on-going counter-recruitment campaign include leafleting outside Pittsburgh high schools and a petition drive to pass a Pittsburgh Public School Board resolution banning or at least limiting recruiters' access to students at local high schools. POG is also planning a regional counter recruitment conference in early March in order to bring together local and out-of-town groups working against military recruitment.

For more information about POG and its counter recruitment campaign, visit http://www.organizepittsburgh.org or email This email address is being protected from spambots. You need JavaScript enabled to view it..