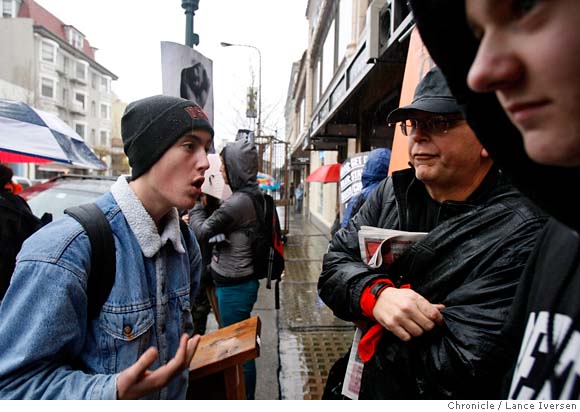 01/02.2008 / Kevin Fagan / San Francisco Chronicle - Emboldened by this week's show of support by the Berkeley City Council, anti-war protesters on Thursday cranked up their noisy effort to throw the U.S. Marine Corps recruiters out of town, but in the pounding rain it was hard to tell who won the figurative battle of wills.

On one hand, the protesters mustered one of their biggest crowds yet - 40 people - to yell "Drive out the Bush regime" and other slogans outside the Marines' recruiting station on Shattuck Avenue. Hundreds of motorists honked in support as they passed.

And not only did the protesters get soaked to the bone in one of the heaviest downpours all week, several local business owners and their customers seethed under the aural onslaught of bullhorns and chanting from 3 to 5 p.m.

"They need a place to be heard, but it doesn't seem like this is the best one," complained Mike Mathis, who sometimes had to shout to be heard as his hair was being cut at the ZNS Beauty Station, next door to the Marines' office. "This is too small a place for a protest this loud."

Not in the minds of those doing the protest, it wasn't.

The spot was perfect and the noise justified, said Zanne Joy, who has been helping organize peace demonstrations at the recruiting station for four months with the women's anti-war group Code Pink. Anything legal is justified if it succeeds in persuading the Marine Corps to move its recruiting station out of Berkeley, she said, noting proudly that the Berkeley City Council agrees.

The council voted late Tuesday to give Code Pink a designated parking space directly in front of the recruiting station, as well as a sound permit for once-a-week protests. It also approved a separate resolution calling the military recruiters "uninvited and unwelcome intruders" and declaring that the office - which opened quietly in December 2006 - is not welcome in the city.

"We were shocked when we learned last fall that this recruiting station showed up here," Joy said. "It's an affront to the city and the people of Berkeley, who have always supported peace."

Since October, the weekly protests by Code Pink have mostly consisted of about a dozen people, so Thursday's crowd was a significant escalation. Joy and representatives from several other protest groups said they intend to mount demonstrations as many times a week as they can, even if the sound permit is good only once a week.

They also began circulating a petition on Wednesday to gather 5,000 signatures to put a measure on the November ballot that would require public hearings before military recruiting offices could open up near schools or homes.

Marine Corps officials did not return calls for comment.

However, ex-Marine Staff Sgt. Bill Hamilton showed up on his own to say he wholeheartedly supports the rights of the protesters to speak , but doesn't like their effort to silence the Marine Corps' voice in Berkeley.

"They don't seem to realize that this recruiting office is only for recruiting potential officers with college degrees, not kids right out of high school," said Hamilton, who drove in from Pleasanton to become the only on-scene counterpoint to the demonstration. "Marines are willing to die so these people can have their say, but I wish they understood the situation better."

Even the City Council is not of one voice on the matter.

The vote to award the Code Pink parking spot was 8-1, and the condemnation resolution was 6-3. On Thursday, the polarized emotions that went into those votes had not abated.

"I'm ashamed of my vote," said Councilwoman Betty Olds, who helped approve the parking spot but not the condemnation. "The protesters should have free speech - this is where Free Speech was born, after all - but to tell the Marines they are not welcome is shameful. If I had to do it again, I wouldn't even go for the parking spot."

Councilwoman Dona Spring, however, said she would love to step up the pressure even more against the Marine recruiting office.

"We're not condemning the men and women who serve, we are condemning the U.S. policy that is teaching the Marines and other military people to torture, oust other countries' political leaders and do other evil things."