Not Your Soldier Day of Action 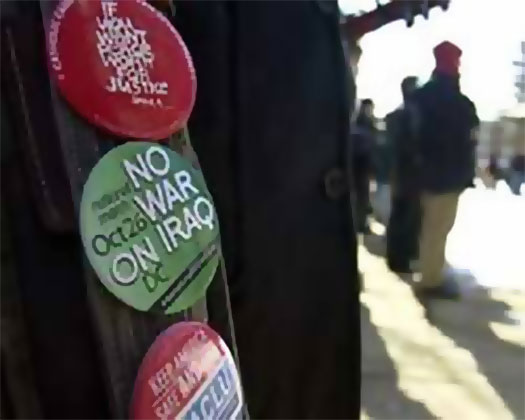 17/11/2005 / Mike Burke / National Youth and Student Peace Coalition - Not Your Soldier Day of Action erupts on over 40 campuses nationwide Students across the country to protest military recruitment in schools, call for end of war on Iraq

New York, NY – With a growing majority of the American public opposing the war on Iraq and President George Bush’s approval rating hitting an all time low, students and young people are joining forces with veterans, military families, clergy, and others for a national day of protest on International Students Day, November 17.

The Not Your Soldier Day of Action is the first nationally coordinated mobilization by young people against military recruitment in our schools. From New York to Los Angeles, Milwaukee to Austin, students are holding rallies, teach-ins, marches and walk outs with the theme of "Books Not Bombs" to protest military recruitment practices and the war on Iraq. There will also be events in Puerto Rico, Mexico and Colombia.

"This war is having a devastating impact on our generation and our education," said Emily Pollack, a student at Rutgers University in New Jersey. "The occupation is costing $7 billion per month while the House of Representatives votes next week on the largest cut to student loans in the history of these federal programs, over $14 billion!" The Not Your Soldier Day of Action will amplify the voices of the millennium generation who are saying no military recruiters in schools. At Hicksville High School in New York students will walkout during lunch.  Washington, DC- area students will reach rush-hour federal employees with the message of "Stop the Assault on Youth."  On Friday, in Colorado Springs, CO, Iraq Veterans Against the War will march to a recruiting center. "This day of action is calling attention to the predatory recruitment of low-income youth and youth of color by the US military," said Camilo Mejia, a conscientious objector and member of Iraq Veterans Against the War.  "While it is people like me, who want job training and education, who have risked our lives in Iraq, it is Bush’s cronies at Bechtel and Halliburton who profit every day from our service in this unfounded war."