Carson Frame / The American Homefront Project - Listen to the Report 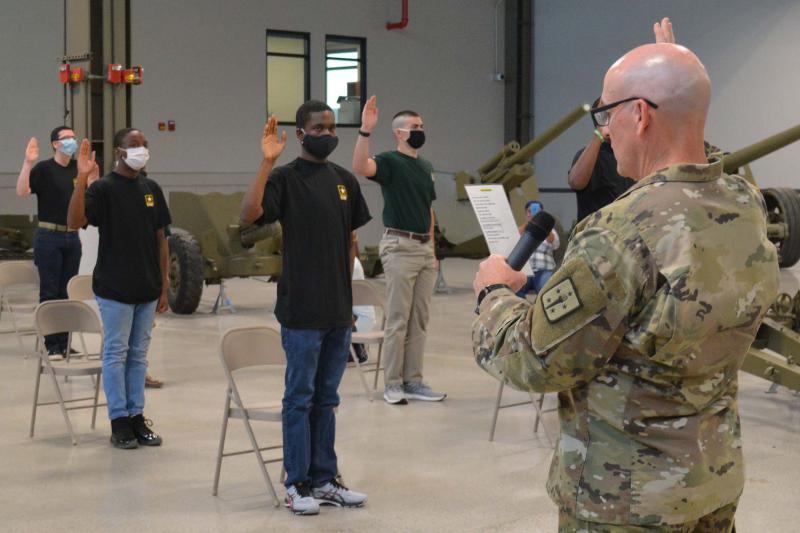 The Army is holding its first nationwide virtual recruiting campaign, after the COVID-19 pandemic forced it to scale back face-to-face interactions and revealed gaps in its digital outreach strategy.

As the coronavirus pandemic bloomed this spring, the Army reduced staff at many brick-and-mortar recruiting stations across the country. Enlistments slowed, fueling concerns that the service would have to extend the contracts of current soldiers in order to meet total force requirements.

Recruiters took their work remote, but lost out on some of the major recruitment opportunities that normally boost their numbers.

"That last moment before a senior leaves their high school-- typically we're there," said Staff Sgt. Kara Wilson, a station commander in West Texas. "We're helping them with support, finding them different avenues."

"However, we didn't have that moment this year, she said."

So Wilson and her team have had to build an online recruiting environment to reach those same young people. Apps like Facebook, Instagram, and Snapchat have proven the most effective, and Wilson has designed new campaigns for each.

But not without a little help.

"I have teenagers at home," she said. "So they have kind of schooled me on many of these new platforms, which allows me to get after the Generation Zs."

Wilson's Instagram is overflowing with images related to fitness training, as she is a marathoner. She's also posted photos of herself and others at the start of their Army careers. Several images reference the service's 'What's Your Warrior?' ad campaign. In one image, Wilson reminds interested young people that they can interview for Army positions remotely, given COVID-19.

Wilson said one of her best engagement efforts was a 45-minute Instagram Live Q&A session about what it's like to be a soldier. She promoted it for weeks and posted a count-down to her feed. People viewed the video more than 300 times.

Wilson said the idea was inspired by her 14 year-old daughter, who was raised in the Army.

"She said, 'You know, mom, I'm your kid… But other people just see you as a soldier. So what if you did a meeting with somebody else? Maybe a friend of yours in the Army... and you guys did like a question-answer thing?'" Wilson remembered. "I thought, 'Wow, that's awesome.'"

Fitness challenges, e-sports tournaments, and video testimonials are other ways Army recruiters have tried to grab the attention of young people online. Even before the pandemic, the Army was working to incorporate more digital outreach into its marketing. But it wasn't doing it especially well, according to Emma Moore, a researcher with the Military, Veterans, and Society program at the Center for a New American Security.

"The digital engagement was showing gains. But I would say from probably most other private company and marketing measures, it's been ad hoc," Moore said. "The Army is not set up to be incredibly flexible and responsive to changing their narrative or their marketing campaign."

That's a disadvantage in the digital space, where apps and communication platforms quickly evolve.

"While I am encouraged by the fact that I'm seeing new types of outreach, via photos, videos, hashtags, it's still a little clunky. It still feels very Army," she said. "So I wonder about how to enable younger recruiters."

Starting in 2018, the Army began to back off from its top-down approach to recruiting, giving local recruiters more flexibility to design social media campaigns and adapt them to new platforms. It trains recruiters how to get more social media followers and encourages them to re-engage with enlistees whose contracts they've inked.

"With technology, there are innovations happening every day," said Maj. Gen. Frank Muth, head of the Army's recruiting command. "We've got to be able to not be so much a hierarchical organization that just validates the systems put into place, but be a network."

Enlistments are about 4,000 under the Army's stated goals for this time of year, Muth said. Following the issuance of stay-at-home orders in March, there was a dip in interest, and that setback is still being felt.

But interest from young people has slowly started to tick back up, according to Muth. He said the pandemic's full impact on recruitment is unclear. But he guesses that if joblessness hasn't gone down by fall, the Army will see a bump in people wanting to join.

Typically, when unemployment exceeds 6%, the military sees a surge of interest, especially from young people leaving high school and college.

Muth added that virtual outreach is here to stay, and that about 90 percent of the recruiting process can be done online.

"I think at the end of the day, what we'll find is that we may be able to reduce some of our recruiting force and reduce some of their brick and mortar."