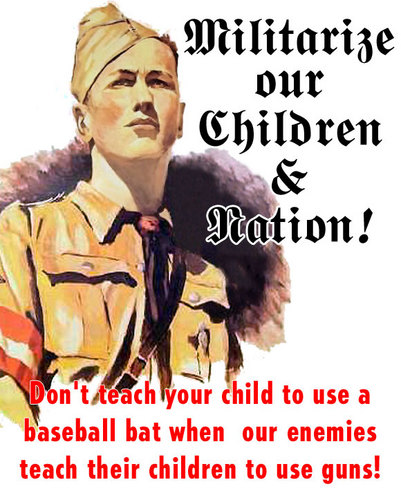 This is what German pacifist Kurt Tucholsky wrote in an article titled “On effective pacifism”, published in 1927. More than 80 years later, the militarists are still sowing. The presence of the military in schools is only the most outrageous example of the sowing and planting of militarist values into the minds of children and soon-to-be soldiers, or supporters of militarism and war. It is the most outrageous, because on the one hand schools should be about learning positive values and knowledge, and not about propaganda, and on the other hand children are most vulnerable to propaganda and indoctrination.

A key function of military presence at schools is propaganda. This can be very obvious – as we can see in Serdar M. Degirmencioglu's article on militarism in schools in Turkey (see page 4 in the article in The Broken Rifle, March 2011, No. 88) – or more subtle, as the German military's use of the simulation game “Politics & International Security” in schools and universities (see Michael Schulze von Glaßer's article on page 9 - ibid). This military propaganda is aimed at ingraining militarist values into the minds of children, so that they do not question the existence and use of the military in later life.

As Sergeiy Sandler writes: “Military presence in Israeli schools is not so much about military recruitment. It is about maintaining a social order.” This is true for most countries, with or without conscription. And it points to a bigger issue, which goes beyond antimilitarism: school itself – with or without military presence – is about maintaining a social order (the state, capitalism, the Bolivarian revolution), and not just about education and passing on knowledge. How much the military is present in schools (and how much military is used as a positive example in school – in history, science, etc.) can be seen as a marker for the level of militarisation of our societies.

But military presence in schools is not only about propaganda. Especially in countries without conscription – or with a high level of “professionalisation” of the military – the military needs to actively reach out to potential new recruits from a very young age on. David Gee in his article on Britain (Soldiers in the playground, page 7) quotes the head of army recruitment strategy, Colonel David Allfrey: “Our new model is about raising awareness, and that takes a ten-year span. It starts with a seven-year-old boy seeing a parachutist at an air show and thinking 'That looks great'. From then on the army is trying to build interest by drip, drip, drip.”

This “drip, drip, drip” is a long-term strategy, so that when someone reaches recruitment age, a career in the military seems an interesting option.

It is no surprise that military presence is often higher in schools in disadvantaged neighbourhoods. Here, the recruiters think they can more easily prey on youth who have much less opportunities to find jobs – and so might be more easily recruited into the military. But modern armies also need highly skilled soldiers, and so the military will also target their recruitment efforts at universities.

Within the peace and anti-war movements, there are different approaches to the presence of the military in schools. Some argue for “equal access” for the peace movement to schools, to be able to counter the military propaganda. While it can be quite effective to counter the arguments of a military recruiter or “adviser” in a direct confrontation on the school yard or in the class room, there remains the question of resources. Even if we would be allowed to – would we, as anti war activists – be able to go to every school every time the military is present there, in the class room or on the school yard? I do not only doubt it – I'm pretty sure this is impossible.

Another position – and from my perspective the more principled one – is to demand that the military has nothing to do in schools – it should be banned from any school completely. This might sound radical – after all, the military is one of the most powerful institutions in most states – but it is not more unrealistic than being able to “accompany” any military presence at schools.

Independent of these two approaches, education for peace is often promoted as a task for schools. While any form of peace education is certainly important, I personally have my doubts how they can fit into a system which is designed for “maintaining a social order” which relies on war. Schools in itself are violent institutions, representations of structural violence. While many teachers try to subvert the structural violence inherent in our existing education systems, it is always there: the pressure of “grading”, authoritarian rules and in many countries/schools even school uniforms and dress codes, designed to stifle any form of individual expression. Within this framework of structural violence (and military propaganda), peace education might seem hypocritical.

But resistance exists – in some schools more, in others less, in some countries more, in others less. Teachers can simply refuse to invite the military into their classes, parents can withdraw their children from classes which are linked to the military, and pupils can refuse to participate in such classes, either legally or by just not showing up. Resistance exists often on an individual level, but it becomes effective and a threat when it gets organised, such as in the USA with the National Network Opposing the Militarization of Youth, or in Germany with regional campaigns Military out of Schools. How these campaigns can work depends very much on the context of the country – politically and in terms of the education system. But similar campaigns are important everywhere.

We have to sow

But to get the military out of schools is not sufficient. The state and the military are sowing militarism in our schools, so that they can harvest it when needed – to go to war in Iraq, Afghanistan, or … [fill in the next country here], and so that they can recruit the cannon fodder/professional killers (yes, soldiers are both) needed for these wars. Again Tucholsky on “effective pacifism”: “What is completely missing almost everywhere is pacifist propaganda in daily life, on the street, in the four room apartment, on public places – pacifism as a matter of course. For or five times a year we are there, at congresses, often in assemblies. And then everyone goes home, and “life” takes its right: life – this in this case is the official patriotism, which praises war; the cinema, which glorifies war; the newspaper, that doesn't dare to show war as it is; the church, that agitates for war …; the school, which mendaciously transforms war into a bombastic panopticon; the university that celebrates war —, everywhere war.”2

Schools – the classrooms – are an important place for pacifist propaganda and counter-propaganda. We should not expect it to become part of the curriculum, and that it can then be left to the state. Far from it. The state's business is militarism and war. Pacifist propaganda in schools needs to be organised outside of official channels – by teachers and their unions, by pupils and their own organisations, by parents.

Countering military recruitment at schools does not only start when the recruiters appear – it needs to start with the countering of the military's “drip, drip, drip” strategy, with countering the glorification of military and war everywhere in the daily teaching of a school. It has to rip out the seeds the military is sowing, and plant something else. Let's get sowing.